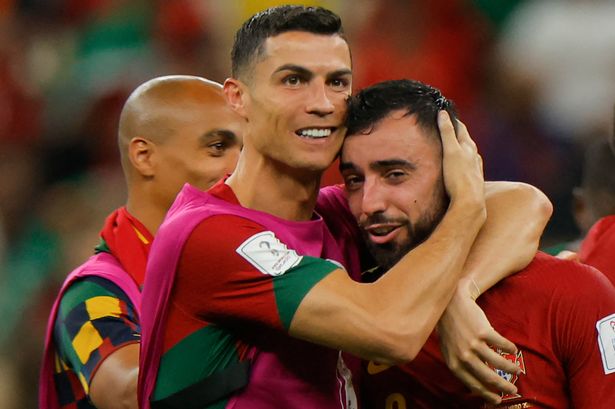 Portugal joined France and Brazil as the first countries to qualify from the group stage of the ongoing Qatar 2022 World Cup after Bruno Fernandes helped the Seleção das Quinas to beat Uruguay 2-0 on Monday night.

Meanwhile, Cristiano Ronaldo appeared to have claimed Fernandes’ first goal with the Portugal skipper widely celebrating the goal that was eventually and officially awarded to Fernandes after replays showed that there was no touch from Ronaldo leading to the goal.

However, Fernandes is set to gift his skipper the goal after the Manchester United midfielder insisted that Ronaldo did get a touch on his cross against Uruguay and the forward should therefore be awarded the goal.

Ronaldo, though, was adamant and he was seen complaining on the pitch after the full-time whistle once he learned that the goal had not been given to him.

The five-time Ballon d’Or winner who seemed to scored his second goal of the tournament so far was seen off the pitch by the time that Fernandes doubled Portugal’s advantage from the penalty spot in injury time to secure his side’s passage to the knockout rounds.

But National Daily can confirm that Fernandes appeared to have been in a generous mood after the match, as he insisted that it was Ronaldo that scored the opener against the South Americans.

‘I celebrated as if it had been Cristiano’s goal,’ said Fernandes.

‘It seemed to me that he had touched the ball, my objective was to make a cross for him.

‘Regardless, we are happy for the victory, if one of us scores or the other does.’

Portugal can guarantee they progress as group winners with a point in their final group game against South Korea.

In any case, it would take Ghana to beat Uruguay in order for Portugal to lose their spot as group leaders.