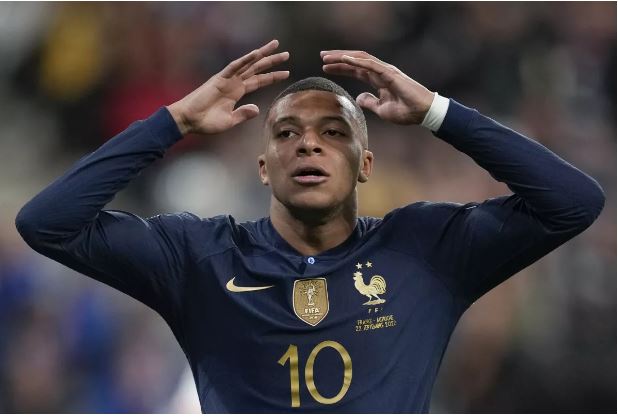 Report has emerged of France Kylian Mbappe as set to be sanctioned by FIFA after refusing to speak to the media for the second successive game at the World Cup.

Mbappe netted twice to fire France to a deserved 2-1 victory over Denmark and seal their place in the knockout stages in Qatar. The Paris Saint-Germain striker scored either side of an Andreas Christensen header to secure the victory for Les Bleus on Saturday evening.

It was a Man of the Match performance from Mbappe, who continues to light up the tournament having already found the back of the net in France’s opening-game 4-1 victory over Australia earlier this week. It means he has already bagged three goals in the Middle East and is just one goal shy of equalling his tally from the 2018 World Cup.

However, Mbappe refused to stop and speak to the media in the mixed zone after either game and that means he and the French Football Federation (FFF) are set to be hit with a fine from FIFA, the governing body of world football.

The FFF was warned after Mbappe was not presented for interview after the win over Australia that if the same thing happened again later in the tournament, that they would be fined, which looks set to happen. It is likely that the FFF and Mbappe will share the fine.

Both parties are aware that the striker is likely to be asked by media outlets about his future at club level, which he does not wish to discuss. Not only is this unlikely to produce any meaningful answers, but anything that the striker does say could be seen as a distraction for the French team.

That also explains why the PSG striker has not yet appeared at a press conference throughout France’s stay in Qatar. Lloris, Marcus Thuram, Matteo Guendouzi, Tchouameni, Upamecano, Eduardo Camavinga, Jordan Veretout, Giroud, Lucas Hernandez, Ousmane Dembele, Varane and Theo Hernandez are among his French teammates who have shown their faces at the press conferences.

Mbappe is said to be unhappy at PSG amid continued speculation that he could leave the club, possibly as early as the January transfer window. However, for now, the striker is fully focused on the World Cup and will not speak over his club situation.