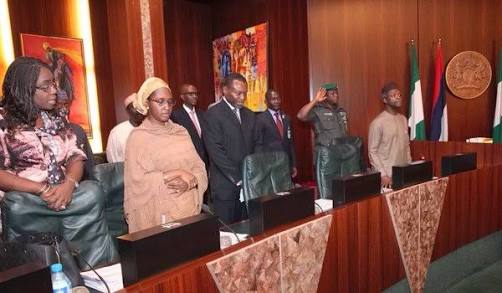 Share this on WhatsApp
Spread the love
Despite reports that President Muhammadu Buhari resumed duty on Tuesday, National Daily gathered that the President was absent at the federal Executive council meeting this Wednesday at the Presidential Villa, Abuja.
Findings from Aso Rock Villa, Abuja, this Wednesday, indicated that for the third time consecutively, President Buhari has been absent at Federal Executive Council meeting for the obvious reasons of ill-health. The Presidency has, however, persistently assured Nigerians and the international community that there is no cause for alarm over the health of President Buhari.
Meanwhile, President Buhari was gathered to have returned to work on Tuesday; the same day, he was said to have held separate meetings with the Attorney-General of the Federation and Minister of Justice, Abubakar Malami, and the Group Managing Director (GMD), of the Nigerian National Petroleum Corporation (NNPC), Dr. Maikati Baru.
ALSO SEE: Disquiets over Buhari’s absence from FEC meeting a third time
The President had been away from his office over the past two weeks; and Presidency had explained that he was advised by his doctors to take some days off to rest.
Before now, Alhaji Lai Mohammed, Minister of Information and Culture, had said that President Buhari was working from home; adding that he then ordered that all files in his office be sent to his residence for official attendance.
Resuming work on Tuesday, President Buhari was said to have received briefing from the NNPC GMD on the activities of the corporation and its subsidiaries, and on the relative stability in the country’s oil and gas sector in recent time.
Share this on WhatsApp