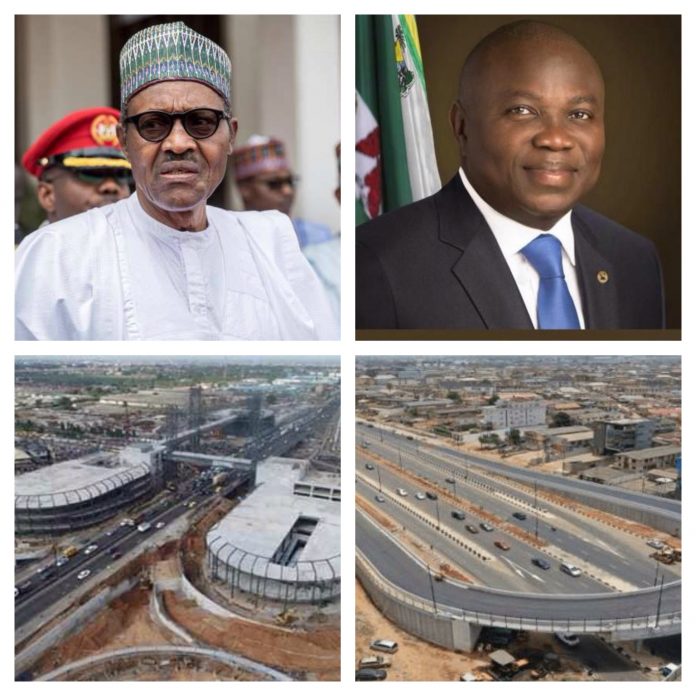 President Mohammadu Buhari is in Lagos for a visit. And many says just like he did the last time he was here on a state visit, Buhari is returning to Lagos to commission uncompleted projects again. The Airport Road is incomplete. The Oshodi Interchange is halfway ready. There are still tonnes of work to be done at the Lagos Theater, Oregun.

On the same topic Reno Omokri took a different focus he said, “Southern Nigerians think @MBuhari marginalises them by promoting a Northernisation policy. Wrong. He is God’s tool. Many Southerners are fleeing Nigeria. Tomorrow, they’ll dominate the world. I foresee a future Nigerian President visiting a future British PM of Nigerian heritage”.

National Daily in monitoring the social media space discovers many diverse opinion on the issue. And while our reporter visited the Inauguration of Ayinke Mother And Child Center, it was observed that only the Governors, President and the ministers were allowed to go inside for the inspection. The press were not allowed to go inside, further raising the suspicion that the projects are not actually 100 per cent ready.

Many blame APC Leader, Ahmed Tinubu for Ambode’s rush to inaugurate these vital projects without reaching its completion.

The 15 tweets below suggests different theories to the visit:

BRF was to commission the Ikorodu Rd. reconstruction, but he left it for Ambode to commission, (he did not even invite BRT to the commissioning) because it was completed just a week before the expiration of his term. Ambode need to drop his ego. #FPN

I cannot blame Ambode, he won’t t allow a new person (Sanwo-Olu) to commission his major projects. I learnt Fashola was not invited officially too.

I’m not a fan of Tinubu and Apc, but you should stop taking hypocritical shots at him. If Ambode won his second term primary and he’s to rule for the next 4 yrs, I bet you won’t tweet this. Lagos roads have become so terrible, everywhere is dirty, traffic is getting worse etc

Gov. Ambode is trying to avoid argument on who did this project or who did that! He is commissioning 65% Completed project!

@AkinwunmiAmbode
PMB is everyone’s favourite Grandpa. He is over compensating with Ambode since he could not persuade Lagosians to give Ambode a second term.

Lol Ambode would one day regret not standing for himself.

I always and will always say it again and again; Tinubu is an Enemy to Yoruba race, instead he’s after his own interest.

Lagosians will one day regret ever not standing up for this able Governor Ambode.

Ambode is just shooting himself in the foot. How in God’s name would any sane person just decide to frustrate others by bringing the president to come commission unfinished projects On a working day with its resultant traffic stress? Sigh

ONLY Ambode brings Buhari to commission nonsense project. The bus stop he came to commission is no longer in existence.But Buhari’s love for scissors won’t let him see,he just love to cut tapes with his starched babanriga. He’ll commission a kiosk happily if U put tapes round it.

I’m not a partisan, but I must commend Lagos State Outgoing governor, Akinwunmi Ambode for the good works. Lagosians will regret letting the amazing man go just like that. Just see this for yourself. Isn’t it world class standard?

THIS IS U-TURN, GOVERNOR AMBODE CONFIRM!

Plus the trash! Goodness me, the trash! Lagos is dirty as hell. Ambode really, really, really messed up with that Visionscape nonsense. How you can can change a working system, instead of making it better, is a mystery…

The traffic lights at Allen roundabout stopped working months ago. The ministry of transport Is just few miles away, Lagosians have to endure pain everyday..I haven’t seen Lagos in this intolerable state.