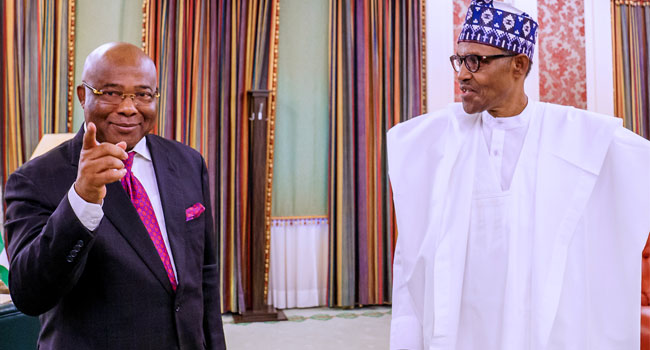 Gov. Hope Uzodinma of Imo has said that President Muhammadu Buhari has granted his request to inaugurate the Owerri-Orlu and Owerri-Okigwe roads in May.

This is contained in a statement issied the Governor’s Media Adviser, Oguwike Nwachuku, and made available to newsmen in Owerri on Tuesday.

According to the statement, the governor said he received the president’s nod on Tuesday in Abuja, when he briefed him on the progress so far recorded on the two projects.

Uzodinma said that although they are federal roads, his government decided to reconstruct them to “alleviate the sufferings of the people and enable farmers to evacuate their produce with ease”.

He expressed optimism that the Federal Government would be moved to compensate the Imo Government for embarking on the projects.

He said that the contractors – Craneburg – a world class construction company handling the projects, had given assurance that they would be ready by next month, having achieved 90 per cent completion.

“It is, therefore, worthy to note that the roads, which are federal roads, are currently being reconstructed by Imo Government with dual carriage for the Owerri-Orlu Road and expanded width for the Owerri-Okigwe Road, as approved by the president,” he said.

The governor, however, said that arrangements were in top gear to award the Owerri/Egbu/Mbaise/Umuahia Road for reconstruction.

He said that he would return to the president next week to finalise talks on the project.