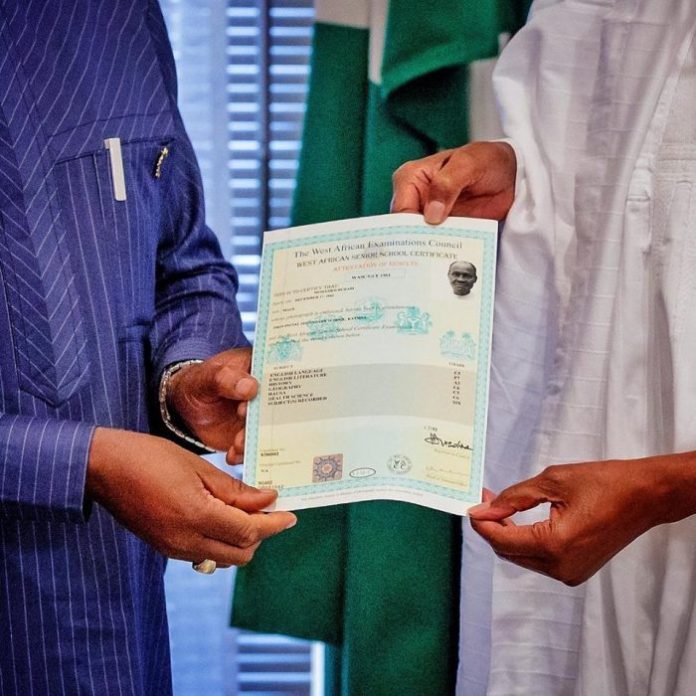 The Coalition of United Political Parties (CUPP) has described the release of attestation certificate result to President Muhammadu Buhari on Friday by the West African Examination Council (WAEC) as a desperate effort to mislead the court and shield Buhari from being disqualified from the 2019 presidential election.

The West African Examination Council (WAEC) on Friday led by its Registrar, Dr. Iyi Uwadiae had presented an attestation and confirmation of President Buhari 1961 WASSC to him during a courtesy visit to the president at the presidential villa, Abuja.

But in a statement issued by Ikenga Ugochinyere, CUPP spokesman, the group alleged that the examination body “manufactured an afterthought confirmation of result” not backed with any evidence to show that the president sat for the exam.

CUPP accused WAEC of manufacturing a doctored result for President Muhammadu Buhari, adding that the examination body has succumbed to a “high level pressure” to issue out the document.

“Let Nigerians be reminded that few days ago the opposition raised an alarm that there was ongoing move to tamper with the records of WAEC and pressure the leadership into manufacturing a result for President Buhari,” the statement read.

“Today’s action of WAEC have vindicated our earlier fears and confirmed our stand that WAEC is now competing with Oluwale Market in manufacturing documents.”

The CUPP challenged WAEC to publicly display the original 1961 ledger and booklet containing the scores and names of students who sat for the exam in the provincial secondary school, Kastina, (now called Government Secondary School) to back up the confirmation of result issued to the president or apologise to Nigerians for attempting to mislead them.

It noted that no amount of engineered misinformation can change the mind of the electorate from voting out the “incompetent regime of Buhari that have destroyed the Nigerian economy, divided our people and made our nation insecure”.

There has been controversy over whether or not the president wrote the O’Level exam having claimed in his affidavit to the Independent National Electoral Commission (INEC) that his original credentials were with the military.

Recall that the Peoples’ Democratic Party (PDP) had on Oct. 26 challenged Buhari to show proof of his integrity by presenting his academic credentials “if he has any,” to the INEC.