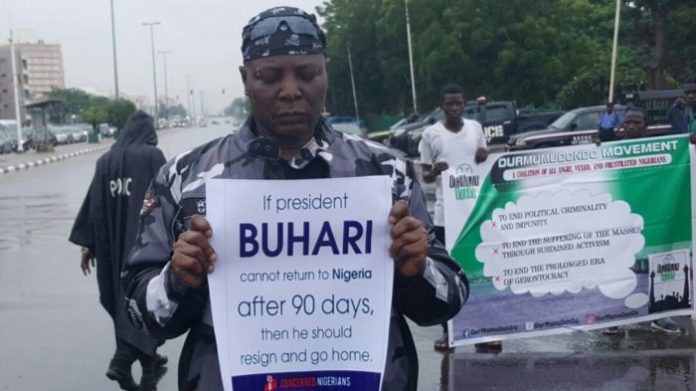 Charly Boy has suspended the sit-out action in Abuja after leading a coalition of civil society organizations in a protest of the 101 days President Muhammadu Buhari has been absent from Nigeria as he continues his medical vacation in London, the United Kingdom.  He, however, said that the next line of action would be made known.

The leader of civil society coalition under the aegis of OurmumuDonDo which staged mass protest demanding that President Buhari either return home to resume duties or resigns, on Wednesday, announced the suspension of activities, saying the groups  will determine when to  communicate members to resume the protest.

National Daily gathered that the Area Father, who spoke at the Unity Fountain, this Wednesday, declared: “We are not deterred by the intimidation and harassment by the sponsored thugs and we cannot be cowed by a few group of people.

“What government want to do is to ensure that we have a clash with the hired crowd and we will not allow that to happen,”

It will be recalled that a pro-Buhari group had on Tuesday, under Police escort, attempted to attack the Area Father and his group at the Wuse Market, injuring many and destroying his vehicle.

Before then, the Police had earlier invaded the venue of the protest and the sit-out mass action, exploding teargas canisters caused suffocation of the activists. However, they refused to be intimidated and sustained their protest before the said hired thugs attempted to attack members of the civil society coalition.