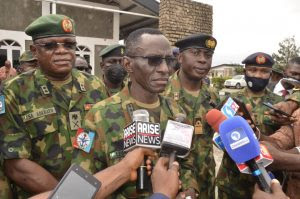 The Chief of Defence Staff (CDS), Gen. Lucky Irabor, has assured South-Easterners of his commitment to improve the security situation in the region.

Irabor gave the assurance on Thursday in Owerri while interacting with retired senior military officers from the Southeast zone.

The Deputy Director, Defence Information, Air Commodore Wap Maigida, disclosed this in a statement he issued in Abuja.

The CDS said the military was at the forefront of redressing various security threats confronting the country, pointing out that the police and other security agencies were working in synergy to redress the threats.

He said that the current agitations in the southeast had made the security situation in the zone a peculiar one, adding that a good number of those in support of such agitations had a wrong understanding of the realities on the ground.

According to him, the engagements of the military veterans in the region are useful, given their privileged and distinct positions.

He said they could bring greater understanding to stakeholders in the region and disabuse the misconceptions and perceptions of the agitators.

Irabor commended the senior citizens for the turnout, adding that they remained dependable partners in establishing peace and stability in the country.

He urged the veterans to remain loyal as demonstrated during their patriotic service in the military, saying that both retired and serving military personnel was completely sold-out to the unity and faith, peace, and progress of the country.

“Among the various stakeholders, the retired senior military officers have the greatest interest within the matrix of defense and national security,” he said.

The Chief of Defence, Civil-Military Cooperation (CDCMIC), Rear Adm. Fredrick Ogu, said the input of the retired senior officers was germane in proffering lasting workable solutions to prevailing security in the region.

Ogu said the first and second editions of the CDS interaction with retired senior military held in the Southwest and Northwest regions would be replicated in the remaining geopolitical zones and the FCT.

The General Officer Commanding (GOS), 82 Division, Nigerian Army, Maj.-Gen. Taofeek Lagbaja said the forum would further shape and enhance the collective efforts of the military at responding to the emerging security challenges in the Southeast.

Lagbaja said that the military and other security agencies had continued to enjoy unparalleled support and goodwill of the people.