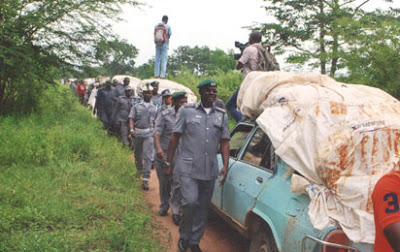 The Federal Operations Unit, Zone “B” of Nigeria Customs Service in Kaduna has confiscated four trucks laden with smuggled goods, with a duty paid value of  N176.976 million.

The Command’s Public Relations Officer, Mr Abubakar Usman, said this on Thursday in Kaduna shortly after displaying the seized items.

According to him, the seizures were made within three days after the lockdown was imposed by the state government to stop the spread of COVID-19.

”While 119 bags of smuggled rice were sandwiched between watermelon,” he said.

The command spokesman said that 63 bales loaded with  6,300 pieces of textile materials, 284 bundles of 5,680 pieces of Shadda were also seized.

”Other items sized include 213 bags of NPK 15-15-15 fertiliser which falls under the import prohibition list and violates section 46 of Customs Excise and Management Act (CEMA) CAP C45 LFN 2004.”

He said four suspects were arrested and would be investigated as well as prosecuted accordingly.

Usman assured Nigerians that the officers in the zone would not relent in their efforts in reducing snuggling to the barest minimum.

Usman warned smugglers to desist from the illegal acts which served as a threat to the nation’s economy.

In a related development, the  Comptroller-General of Nigeria Customs Service, Col. Hameed Ali (Rtd) has commended officers and men for keeping the Seaports functional.

Ali made the commendation in a statement signed by the Public Relations Officer of the service, Mr Joseph Attah.

He explained that his men who were on essential duty in spite of the risks in their respective locations had done well in three days into the lockdown in some parts of the country.

According to him, reports reaching the Headquarters from the Commands indicated that Customs operatives have been rising to the challenge of their professions by carrying out their duty diligently.

“The continuous rigorous patrol of Sea, Creeks and Land borders are crucial activities needed to sustain national economy and protect Nigerians from criminal elements who may want to take advantage to smuggle in items that will further complicate our health and security.

“I want to remind them that this is one of those times when their professional calling as security agents puts them on the line.

“I urge the operatives to maintain person to person distancing, wash their hands regularly, sanitise their hands and comply with all other recommendations by medical experts.

“To the stakeholders who may be coming to the Ports for cargo clearance, please try to co-operate and adhere strictly to the preventive measures put in place at the Commands,” he said.

The Customs boss also prayed for the quick recovery of those undergoing COVID-19 treatment.