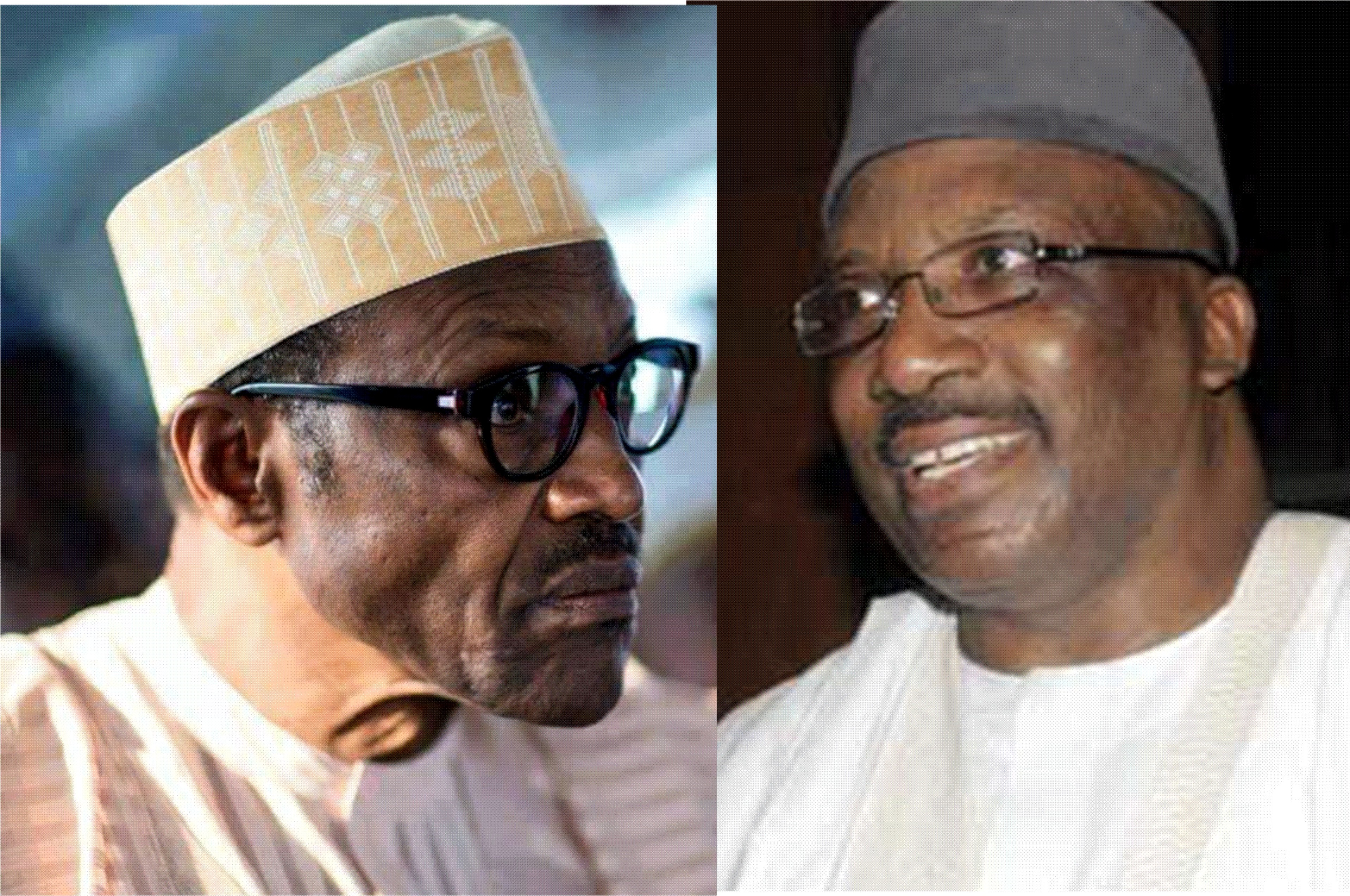 …Buhari in afix over Buratai

PRESIDENT Muhammadu Buhari recently repeated he won’t shield any sleaze bags in his administration. Many Nigerians would have taken him for his words except for some in his government like Chief of Army Staff Gen. Tukur Buratai and his predecessor Abdulrahaman Dambazzau, now interior minister.

It appears the president has chosen to run the gauntlet to shield the two black sheep.At least for now.But the rate at which allegations mount against Dambazzau, the president has got to choose between his government’s integrity orshielding his corrupt minister.

According to SaharaReporters, huge sums of money from the Nigerian National Petroleum Corporation (NNPC) and the National Petroleum Investment Services (NAPIMS), under ex-Minister of Petroleum Resources Diezani Allison-Madueke, were sunk into military operations around the country in the last 13 years.

“We wish to apprise Your Excellency that between 2006 and 2007, the sum of $745million was approved for the Arms of Services and the Nigerian Police Force for funding of security expenses in the Niger Delta,” states the document entitled Payments On Behalf Of Federal Government Re: Logistics Support For Security Operations In The Niger Delta From 2003 To Date,

According to the document, $220million was approved for the Army when Dambazzau was COAS.

The interior minister is not a stranger to allegations like this. Sources in the military said Buhari had backed down from appointing him as NSA last year because of strings of allegations around his neck, including the Kaduna Military Hospital fund mismanaged, when he was COAS. And that drastically reduced his worth before Buhari who eventually shoved him into the interior ministry.

Moreover, the proxy war Buhari’s Chief of Staff Abba Kyari and NSA Babagana Moguno are fighting using DSS boss Lawal Daura (under Dambazzau) and EFCC chair Ibrahim Magu, respectively, is hotting up. And Magu, analysts believe, will make short work of nailing Dambazzau as soon as the anti-corruption agency is directed to step into the arms probe.

And as for Buratai, his days are numbered. So Buhari may see no strong reasonflying into rage over corruption allegations against his COAS. The Army chief joined the service in January 1981, and should be due for retirement any moment from now. Plus his experience in special missions, including Pulo Shield and other international ones, apparently hands him the ace in the counterterrorism (Operation Lafiya Dole) campaign he heads in the northeast. And the C-in-C may bend over backwards, including blinking over little compromises, to keep the winning team.

Critics believe the three preliminary reports of the arms probe from 2007 to 2015 must have indicted Buratai who headed the Army Procurement Directorate at a point within the period.

Procurement actually got first mention in the investigation,“Between 29 April 2005 and 19 October 2010, the MOD (Ministry of Defence) awarded 2 contracts to Progress Limited for the supply of 42 units of BTR-3U Armoured Personnel Carriers and spare parts for the Nigerian Army,” the third interim report stated.

“However, neither the MOD nor the NA could provide the contract agreements to ascertain the cost of the APCs. Although 26 of the APCs were delivered in 2007 and immediately deployed for Peace Keeping Operations in Sudan, the APCs scandalously broke down on induction.”

To flesh out their suspicion, the nay-sayers, including a company of renegades within the Nigeria Army, the Concerned Soldiers and Officers from the Northeast, recently leaked details of Buratai’s estate business in Dubai.

According to the disgruntled soldiers who gave the details to Sharar Reporters, General Buratai and his wives struck a deal for the purchase of a property, Project TFG Marina Hotel, Unit 2711, in Dubai on January 12, 2013 The soldiers alleged that Buratai paid a N115 million out of the N120 million the unit was priced.

They accused the COAS of enriching himself by executing procurement contracts through a proxy: Usman Gamawa, founder of Baggash Investment Limited.

The Army has defended him, however, in what its spokesman Col. Sani Usman called the latest smear campaign against Buratai.“The allegations contained in the write up are baseless and not correct. It is a fact that the Buratai family has two properties in Dubai that were paid in instalments through personal savings three years ago,” said Sani.

“This, along with other personal assets, has consistently been declared by General Buratai in his Assets Declaration Form as Commander Multinational Joint Task Force Commander and as Chief of Army Staff.”

Based on the asset declaration the Army chief made, the defence ministry also said there was nothing in those allegations. “The Ministry of Defence views this as an attempt by some unpatriotic and disgruntled elements to distract the leadership of the Nigerian Armed Forces from the successes in the war against terror, particularly in the North-east”, said Defence Minister Mansur Dan-Ali in a statement by his Principal General Staff Officer Brigadier General Mohammed Ahmed.

But all this defence, many believe, is just an excitement bordering on hypocrisy. The defence ministry and the Army have no point clearing those allegations because they are not investigative bodies.

“Buratai should willingly invite the CCB, the Economic and Financial Crimes Commission (EFCC) and ICPC to look into the matter,” said SAN Femi Falana. “If Buratai was alleged to have unjustly purchased the houses, he has to come out to defend himself. He must show how the money used to purchase the houses was transferred.”

While Buratai has a straw to clutch at with his asset declaration, Interior Minister Dambazzau doesn’t have any defence yet. His tenure as COAS, between 2008 and 2010 was well covered in the terms of reference of the probe panel.

So it becomes difficult for the presidency to shield him. It even gets harder, considering the fact that past top brass like Generals J. Minmah, Azubuike Ihejirika, and 52 others, including those serving, have already been indicted for misappropriating N185,843,052,564.30 and $685,349,692.49 voted for arms purchase over the eight years, according to Information Minister Lai Mohammed.

That Dambazzau didn’t come up on the list was no surprise to many. He was said to have pulled all the stops to get his name out when the latest report was ready. Some even accused the presidency of doctoring the report. Lai Mohammed denied it, though.”When the documents regarding procurement from 2007 to 2010 are available and scrutinized, the committee will then issue its report on that. The audit is being done on phases, and the report that was released on Thursday is the third of such,” he said.

As Nigerians wait for the documents to rare up, more swingeing evidence of Dambazzau’s unexplained wealth is hitting the public domain. An investigation by Sahara Reporters has uncovered his investment in real estate in Abuja and the U.S. This includes a seven-bedroom house bought for $1.99 million in Winchester, Massachusetts. His wife Hadiza also purchased a condominium for $892,000 in Boston two months ago.

Those are additions to the minister’s properties in Abuja, which include Hajjar Plaza, Lebrex Plaza, and another one in Wuse.

Obviously, the Committee on Audit of Defence Equipment Procurement in the Nigerian might not be able to get to the root of all this. Which is why many won’t believe Buhari’s anti-corruption fight especially if he refuses to direct anti-corruption agencies like the EFCC and ICPC to step in.