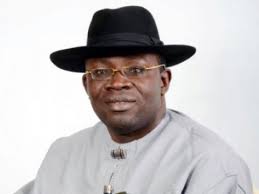 THE Governor of Bayelsa State, Henry Seriake Dickson, has presented a N150 billion budget tagged ‘Budget of Transition’ for the 2016 fiscal year, as against N250bn passed into law in 2015. to the State House of Assembly.
The budget, which was presented to the state House of Assembly over the weekend, contained recurrent expenditure profile of N43bn and capital expenditure proposal of N25.4bn.
In his presentation, the governor said the budget would be committed to the completion of ongoing projects in the state.
The projected statutory allocation from the Federation Account, according to the governor, is put at N82.3 billion, capital receipts of N51.2 billion, independent revenue sources of N11 billion, which make up the expected total revenue.
The recurrent expenditure as presented by the governor, is having the highest allocation of N43 billion. This would enable the present administration to keep faith with the payment of workers salaries, regardless of the sharp drop in revenues occasioned by slide in crude oil prices.
Other expenditure items include, consolidated revenue fund charges N61.8 million, overhead of N20.2 billion, while capital expenditure was put at N25.4 billion.
Governor Dickson, who described the provision for capital expenditure for the current fiscal year as the least he has ever presented throughout his first term, however promised to review the allocation in the event of any positive change in the revenues accruing to the state.
On sectoral allocations, the Ministry of Works and Infrastructure got the highest allocation of N5.2 billion, education N4 billion, Health N2 billion, Sports N1 billion, Community development N1.7 billion and Agriculture and natural resources N1.3 billion.
The Ministry of Tourism Development got N1.1 billion, Transport N1.1 billion, Housing and Urban Development N1.4 billion part of which the Governor said, would be utilized to build low income residential houses, in partnership with the private sector as land has already been acquired in different parts of the state for that purpose.
Assessing the performance of the 2015 budget of N250 billion comprising an anticipated statutory allocation of N182 billion, capital receipts of N48 billion, Value Added Tax N8.6 billion, Governor Dickson said, what the government received was a far cry from what was projected.
According to him, actual statutory allocation for the 9 months ending at September was N146.5 billion, which he noted was 47% lower than what was budgeted for, VAT N5.3 billion, independent revenue sources N6.2 billion while aids and grants amounted to N1.2 billion.

Share this on WhatsApp
Related Topics:2016 Budgetbayelsa State Govt.Henry Seriake Dickson
Up Next

Apollo Hospital closes 300 holes in the hearts in 5 years

Okorocha swears in 13 commissioners, others