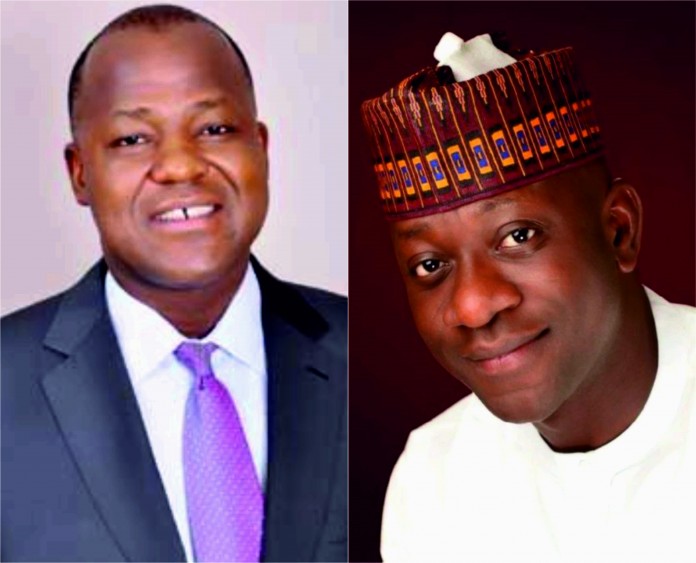 • Lawmakers at war over budget of corruption

THE Speaker of the House of Representatives, Rt. Honourable Yakubu Dogara and his supporters have been working assiduously to avert possible impeachment by his adversaries.

The members of the House have reinvigorated their alignments since the lingering war over budget of corruption reflecting in the budget padding controversies in the Lower Chamber since the removal of Honourable Abdulmumin Jibrin as Chairman of the House Committee on Appropriations.

Some stakeholders in the polity have expressed the view that the budget padding conflict in the Lower Chamber of the National Assembly may not be unconnected with the skirmishes of power contest within the All Progressives Congress (APC).

Some lawmakers, essentially those loyal to the Speaker, have expressed apprehension that the embattled Honourable Abdulmumin Jibrin who was removed as Chairman of the House Committee on Appropriations may be on a mission to rejuvenate the leadership tussle in the House. They expressed suspicion that the embattled lawmaker deliberately omitted the name of the Major Leader of the House, Honourable Femi Gbajabiamila, from his accusations of the House leaders in the alleged N10 billion constituency allocation diversion.

Indeed, Honourable Bashir Baballe, Chairman, House Committee on Budget and National Planning, a representative from Kano State where Jubrin also represents a constituency, expressed surprise why Jubrin left out Gbajabiamila, whom he alleged ensured allocation of over N1.6 billion project to his Surulere 1 constituency in Lagos, in his allegations.

Jibrin had, in attempt to define the limit of his allegations, declared, in part: “I am compelled, again, for the purpose of emphasis, to state categorically clear that my allegations are against the quartet of Speaker Yakubu Dogara, Deputy Speaker Yusuf Lasun, House Whip Alhassan Doguwa and Minority Leader Leo Ogor not the Honourable House as an institution nor other members of the body of principal officers…”

However, Honourable Bashir Baballe, who is also member of House Committee on Appropriation, which Jubrin was the Chairman, expressed concern why Jubrin is restricting the budget padding accusation to the four House leaders.

Bashir Baballe had revealed that several other principal officers, including Majority Leader, Honourable Femi Gbajabiamila, were involved in the controversial budget padding, advocating that investigations should be extended to all the ‘beneficiaries’. “I don’t know why Jubrin did not mention Femi’s name, all the projects Femi put in Surulere 1 Federal constituency are over N1.6 billion,” Baballe declared.

But Jubrin had maintained: “the other members of the body of principal officers were to the best of my knowledge completely excluded from decisions on the 2016 budget and the budget inputs inserted on their names were exclusively carried out by these QUARTET.” Invariably, Gbajabiamila may have benefitted from the padding but may not have been party to the decision. However, the explanation heightens the suspicion by several lawmakers that Jubrin may deliberately be shielding Gbajabiamila and covertly craving Dogara’s removal.

The former Appropriation Committee Chairman had further reveled: “When the Appropriation Committee received all the budget reports from standing committees, an analysis was conducted. We discovered that about 10 only out of the 96 Standing Committees of the House introduced about 2,000 projects without the knowledge of their committee members amounting to about N284 billion.”

Hon. Chris Asubuogu and other members of the Appropriation Committee had expressed concerns that that Jubrin may be up for a dangerous game in the House. They questioned why Jubrin waited until he was removed as the committee chairman before making the accusations. “Why did he not make these accusations while he was chairman; the man is drowning and he wants to pull others to drown with him. Why did he not name other members, something is fishing,” they declared.

Bashir Baballe, a member of the Transparency Group, however, highlighted that the Zonal Intervention Allocation in the budget for the lawmakers is N60 billion, thus, each zone will get N10 billion. This, he said, is shared in the ratio of 40 per cent for the three senators in the zone to 60 per cent to all House of Representatives members in the zone. “I got N40 million projects for my constituency,” Baballe declared. Invariably, Jubrin may have overshot the Zonal Intervention Allocation in his N240 billion allegations contrary to the N60 billion revealed by Baballe.

Baballe disclosed that he started the battle two months ago, before the House went on Sallah recess, when he detected the padding in the 2016 budget. He said that he threatened to resign from the Appropriation Committee but the Speaker prevailed on him to stay on with a promise that the House will address the issue.

Baballe said members of the Transparency Group are demanding investigation of all the people involved in the controversial budget padding, including the Executive or any staff of the National Assembly, and Jubrin as well, who he felt was sacrificed for others.

The lawmakers are, however, at crossroads whether the Speaker should step down and be investigated. This led to the power struggle that has divided the House into the Integrity Group and the Transparency Group; and it’s already extending to ethnic and zonal rivalries among the lawmakers.

Honourable Mohammed Mahmud, from Niger State, taking a moderate position, was of the view that the lawmakers have not exhausted the internal mechanisms of discipline or conflict resolution derivable from the Committee on Ethics and Privileges.

Mahmud advocated for resolution of the crisis from within rather than the lawmakers “washing their dirty linen in the public.” He maintained that “if the Speaker or Jubrin is found guilty, he should be punished.”

National Daily further gathered that lawmakers from Gombe State felt threatened by the budget impasse and have commenced mobilization of their colleagues from the North East zone to defend the Speaker.

The Transparency Group, comprising of 113 lawmakers, insist on the investigation of the budget padding allegations by the Economic and Financial Crimes Commission (EFCC).
Soba, speaking for the Group after a meeting, had maintained: “Let those at the centre of the controversy answer to all the allegations made against them individually and collectively in line with legal practice and our criminal justice system.”

More so, Bashir Baballe added that the Ethics and Privileges Committee should investigate the accusations without delay. He recalled that the Ethics and Privileges Committee in 1999, headed by Farouk Lawan, a lawmaker from Kano, investigated Speaker Salisu Buhari, also from Kano, found him guilty and removed him for certificate forgery. He remarked that the committee is not set up to witch-hunt anybody but ensure probity and accountability in the House.

Accordingly, the Transparency Group insisting on external intervention, declared: “We call for an external investigation into the matter to enable us know if our principal officers are guilty or not.”

And Hon. Musa Soba, APC member from Kaduna, had further insisted: “For this group, we say the budget was padded and as such, the budget being a document that belongs to all Nigerians, it is no longer an internal affair.”

ALSO SEE: 016 Budget: Revitalization of our economy depends of it — Legal practitioner

The Gombe Caucus led by Hon. Ali Isa, which other members include Aishatu Jibrin Dukku, Ustaz Yunusa Ahmad Abubakar, Binta Bello, Ismaila Muazu Hassan and Yaya Bauchi Tongo, reiterated their contrary views on the saga. “We of the Gombe State caucus of the House of Representatives wish to categorically and publicly declare that we are not part of any evil group trying to cause disaffection and instability in the House of Representatives, and we in like manner, dissociate ourselves from any conspiracy and attack against Speaker Yakubu Dogara and the entire leadership of the House,” they had declared inter alia.

Dogara had steered the storm of conflict in the Lower Chamber of the National Assembly with the removal of Jibrin, Chairman of the House Committee on Appropriations, over controversial budget padding. A decision that would superficially be construed as an act to sanitize the House of Representatives and build public confidence has progressively degenerated into an opening of the can of worm on purported impropriety, leading to apprehensions of plot to impeach the Speaker.

After his removal as appropriation committee chairman, Jibrin accused Dogara, Deputy Speaker Yusuf Lasun, House Whip Alhassan Doguwa and Minority Leader Leo Ogor, of influencing the decision to divert N40 billion of the N100 billion budgetary allocations for the House to themselves. He also made several other corruption allegations against Dogara.

Abdulmumin Jibrin was removed as Chairman, House Committee on Appropriations, and replaced with Hon. Mustapha Bala Dawaki on Wednesday, July 20, 2016. Jibrin was removed on the allegation of allocating N4.1 billion to his constituency in the 2016 budget.

Jubrin was an ardent supporter of Dogara during the skirmishes over the House leadership at the inauguration of the National Assembly on June 9, 2015.
The budget padding conflict is already adding to the puzzling questions on the clean credential of the All Progressives Congress (APC) Government on corruption.