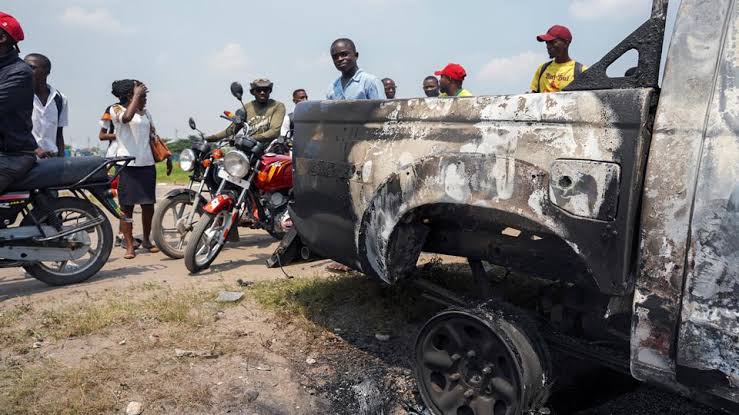 They said many people were also missing after the armed men raided a mining encampment near the town of Mongwalu in the Democratic Republic of Congo’s eastern Ituri province on Sunday.

Army spokesperson Jules Ngongo Tsikudi confirmed a deadly attack had taken place at a mining camp near Mongwalu, but did not detail the number of casualties.

“In the following hours we will know the exact number of deaths. The army is working day and night to completely eliminate the armed groups here in Ituri.”

Civil society leaders estimated that between 30 and 50 people were killed. One said the local hospital had been overwhelmed by the number of victims.

Dieudonné Lossa, who leads a collective of civil society groups in Ituri, blamed the killings on the CODECO militia, which has built a reputation for attacking civilian encampments.

Its fighters killed 18 people at a Church in April, and another 60 at a displaced persons camp in February, authorities have said.

Reuters was unable to reach the group for comment on Sunday.

“The authorities were warned because rumours were already circulating, but misfortune followed,” Lossa said.

Attacks on civilians are daily hazards in Congo’s eastern provinces, where groups like CODECO and other warring militias, as well as a local Islamic State affiliate, routinely spar for territory and resources.

Such conflicts have claimed the lives of thousands and displaced millions more since the turn of the decade, according to the Norwegian Refugee Council.

May marks one year since Congo’s government declared martial law in Ituri and its neighbouring North Kivu province to quell the violence.

However, deadly raids have only surged since then, according to the Kivu Security Tracker, which monitors conflict in the region.

Share this on WhatsApp
Related Topics:DeadDozenseastern Congosuspected militia raid
Up Next