The All Progressives Congress (APC) in Edo State has berated Governor Godwin Obaseki over the delay in the appointment of commissioners, special advisers, special assistants and other executive appointments to constitute the state cabinet in his second tenure.

APC Caretaker Committee Chairman in Edo State, Col. David Imuse rtd, in a statement protested that the unwarranted delay by Governor Obaseki in announcing a cabinet more than three months after assumption of office is unacceptable. The state ad hoc chairman noted that while some supporters of the governor said he is searching for competent hands and bidding his time to avoid making mistakes, the excuse is inane and only goes to portray an elected public servant with a strong desire to transform into a dictator.

The APC Chairman in a statement by Victor Ofure Osehobo, Assistant State Publicity Secretary, scolded Governor Obaseki that when appointed the Secretary to the State Government on November 16, 2020, he promised to make other appointments in the first week of February 2021, which he never did.

Imuse noted that the first week of March is about going, saying that the Governor’s inaction has not only crippled government business but demonstrated that he is a man whose word is not his bond.

The ad hoc state chairman declared in the statement: “Edo State can ill-afford further delay by the Governor to make these vital appointments. Section 192 of the Nigerian Constitution, as amended is clear on the issue of State Commissioners, and permanent secretaries cannot do much as they look up to Commissioners, for direction on policy issues.

“The section gives the Governor a Public mandate rather than private, to appoint commissioners to form not just the state’s executive council, but also the think tank for the development of the state’s economy and wellbeing of the people.

“Right now, the day to day operations of the different State ministries, departments and agencies (MDAs), have come to a halt, while the coordination of important government businesses has become weaker with the unnecessary overload on the Secretary to State Government”.

He maintained: “Since the Governor assumed office in November last year, over 100 days ago, with his disabled State Assembly, using permanent secretaries as acting heads of ministries whose capacities are limited, he has more or less turned a Sole Administrator.

“Edo people are very disappointed by this attitude that this is 100 days after his assumption of office, for a second term, meaning he is not a first timer. The truth is that Edo people are tired of these excuses. He should act fast and in the public interest”.

Buhari succumbs to pressure, denies being in UK for medicals, but taking short rest 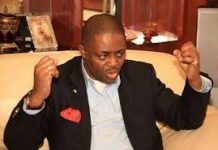