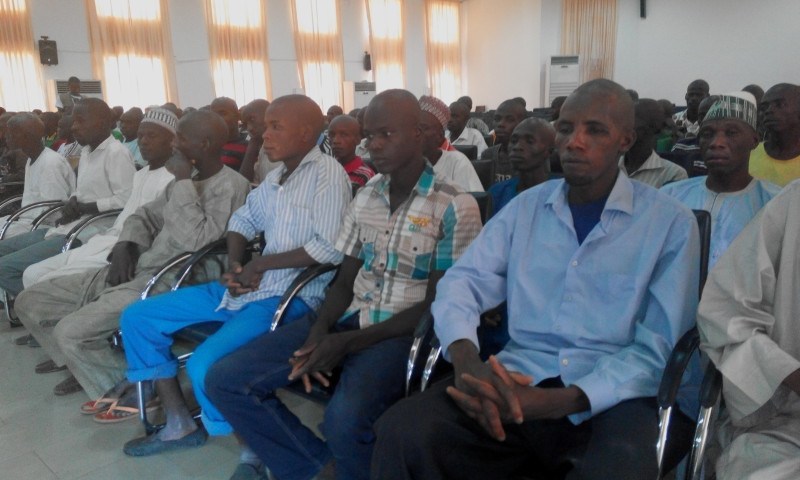 President of the Association of Industrial Security and Safety Operators of Nigeria, Dr. Ona Ekhomu, has advised the Federal Government to exercise extreme caution in the mass release of captured Boko Haram fighters. He said this was necessary for the protection of the society from incessant terrorist attacks by ‘inadvertently recycling insurgents into the battlefield’. He said: “releasing suspected insurgents should be based upon concrete evidence of repentance and conversion to true Islam which extols peace. There must be ample evidence of deradicalization.”

Ekhomu, in a press statement on Tuesday, said the recent mass release of 760 Boko Haram suspects by the Joint Intelligence Center of Operation Lafiya Dole was “rather hasty and ill-advised as it would tend to worsen the threats cape of the region. The mass release of suspects without rigorous investigation of each suspect would tend to worsen an already fragile security eco-system. The JIC is an intelligence authority and not an investigative agency. The Criminal Investigation Department of the Military Provost would have been better placed to conduct these inquiries and make recommendations to the political executive for a final decision” he averred.

Ekhomu, who is the first chartered security professional in Nigeria, said that in 2017 a total of 2603 Boko Haram suspects have been released. Prior to the latest mass release, the activities of the previously released detainees should have been documented and analyzed to determine the performance of the mass release program. He said without such a protocol, then the insurgent release program would appear to be “opaque and arbitrary.”

The security analyst called upon the Federal Government to adequately fund the security programs in the northeast. He said that the frequent mass release of suspects is based upon the fact that the military authorities are not equipped to indefinitely detain prisoners of war. Turning the suspects over to the Borno State government appears to be a way to transfer responsibility away from the military. He said: “ironically, it’s a nation that fights a war and not its military alone. In other words, other agencies are supposed to play their roles – the Police, the Prosecutors, the Judiciary and the Prisons. It is the general failing of these other agencies of state that is over-burdening the military and resulting in these questionable mass release programs that may have the unintended consequence of prolonging the war in the northeast.”

According to Ekhomu, the Boko Haram conflict is classified as a 4th generation warfare. It is asymmetric warfare. Boko Haram’s operational strategy is appropriate messaging to different publics and use of lethal tactics. Captured Boko Haram fighters will quickly assure their captors that they have experienced ideological rebirth as a survival mechanism, even when such assertion is untrue. However, these fighters are free to resume attacks after being handed over to the poorly-resourced Borno State government.

He urged the Federal Government to be acutely aware of the paradigm shift in warfare and formulate prisoner release decisions based upon the realities of 4th generation warfare. He added: “When a suicide bomber blows himself or herself up in a mosque, it is a win for the insurgents.”

Ekhomu praised the Nigerian military for its bravery and brilliance in battle. However, he lamented that the military was being over-stretched by different internal security threats, and there was no need to prolong the Boko Haram conflict longer than necessary by making faulty decisions. He called for the building of high security prison facilities in Borno State where suspects can be held for longer periods of time and be exposed to psychologists and moderate imams who can work on their conversion to mainstream Islam prior to their release.  He said that the decision to release terrorism suspects must be made after careful psychological testing and evaluation by credentialed professionals. That should form the basis for the decision to reintegrate each fighter into civil society. He said that the Borno State Government does not have the capacity to carry out the intricate assessment and evaluation of deradicalization and ideological reorientation of each Boko Haram fighter handed over to them.

Share this on WhatsApp
Related Topics:Association of Industrial Security and Safety Operators of NigeriaBoko Haram sectsDr. Ona EkhomuNigerian Army
Up Next

1 out of 4 girls sexually abused before age 18 – Experts