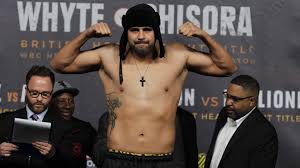 Molina was stopped in the third round by Joshua as the Briton defended his IBF heavyweight title in December 2016.

American boxer Eric Molina has been given an additional one-month ban for breaching the terms of his two-year suspension for failing a doping test.

The 36-year-old was banned in October 2017 after testing positive for a banned substance following his heavyweight fight with Anthony Joshua.

During his ban he had six sparring sessions with Joseph Parker, breaching UK Anti-Doping (Ukad) rules.

It means Molina cannot now return to boxing until midnight on 27 November.

Ukad says it obtained information showing that Molina sparred with Parker in preparation for the New Zealander’s fight against Dillian Whyte on 28 July 2018.