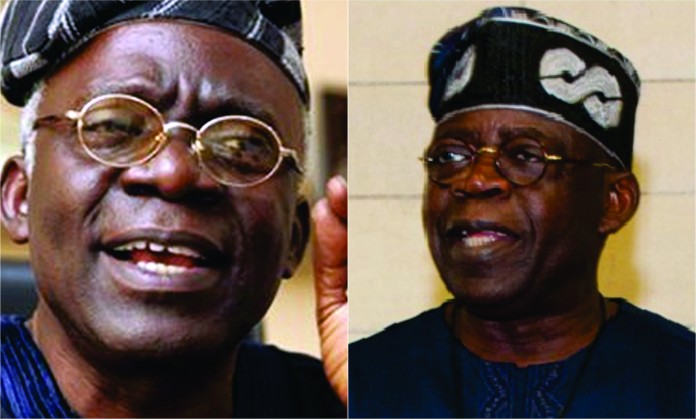 A renowned legal practitioner in Lagos, Mr. Femi Falana, SAN, has opposed the views of the national leader of the All Progressives Congress (APC), Asiwaju Bola Ahmed Tinubu, on the justification for the increase in the pump price of petrol by the federal government last week.

Tinubu had in a statement declared that the President’s decision to reallocate funds once earmarked for the fuel subsidy and commit these to other more socially productive services and undertakings was a difficult decision; [but] it was also a necessary one.

However, Falana countered that view in his statement titled “The illegality, immorality and insensitivity of fuel price increase.” He perceives the decision more of the failure of governance and promotion of the interests of the political class than Nigerian citizens.

Falana had noted that during the campaign in 2015, the APC candidate, General Muhammadu Buhari, pledged that if elected as President by the Nigerian people, his administration would not remove fuel subsidy.

The legal practitioner stated that since he won the election last year, President Buhari has consistently resisted pressures from the neo-liberal characters in the government to remove fuel subsidy and increase the price of petrol. He observed that on January 18, 2016 the federal government allayed the fear of the Nigerian when the price of petrol was reduced to N86.50k per litre. In justifying the decision people the federal government claimed that the reduction was due to an implementation of the revised component of the Petroleum Products Pricing Template for PMS and household kerosene.

Falana recalled that following the popular agitation against the removal of fuel subsidy in 2012, the Ministry of Petroleum Resources had announced the decision of the Goodluck Jonathan administration to set up 30 green field refineries in the country. Shortly thereafter, the policy was jettisoned due to pressure from the cabal of local fuel importers, he added. He said that in 2013, the Jonathan administration secured a loan of $1.6 billion for the maintenance of the country’s four refineries. At the end of the repairs, he observed, the refineries could only refine about 80,000 barrels of crude oil per day instead of 445,000 barrels earmarked for domestic consumption. Falana decried that the Buhari administration has also spent millions of dollars for the so called turn around maintenance of the refineries.

Falana narrated that Dr. Emmanuel Ibe Kachikwu had about a month ago, announced that fuel subsidy had been removed through his ingenuity. “In celebrating the “success” recorded by him in the management of the petroleum industry he disclosed that Nigeria was saving $1 billion in subsidy removal and $1 billion in fuel importation. He also stated that “for the first time, our refineries are ready to work now. Crude has been pumped from Brass to Port Harcourt. Pipeline is being used for the first time in 10 years for the first time in six years.

For the first time we are able to pump to Ilorin, we have not done that in 10 years.” (See Nigerian Tribune, March 16, 2016),” Falana highlighted. He lamented that, “Curiously, Dr. Kachikwu’s “giant strides” in the petroleum industry appear to have collapsed completely before our very eyes!”

Falana bemoaned that the federal government took the Nigerian people by surprise last week when it decided to increase the pump price of petrol from N86.50k to N145 per litre, adding that, Not too long ago, the federal government had supported the imposition of higher tariffs paid on epileptic supply of electricity by consumers. According to him, in sentencing the Nigerian people to excruciating economic agony, the Ministry of Power defied a court order which had restrained the government from giving effect to the proposed electricity tariff. “In the same vein, the decision to increase the price of petrol is also illegal and contemptuous,” Falana declared. He cited that “in the case of Bamidele Aturu versus Attorney-General of the Federation (unreported suit No. FHC/ABJ/CS/591/2009) the Federal High Court declared illegal and unconstitutional the policy decision of the federal government to deregulate the downstream sector of the petroleum industry contrary to the combined effect of the provisions of the Price Control Act and the Petroleum Act.”

Falana further highlighted that, due to the ongoing fuel crisis in the country, the Directorate of Petroleum Resources (DPR) recently invited fresh bids for the setting up modular refineries. At the end of the screening exercise sometime in March this year, the DPR announced that it had awarded 22 licences for modular refineries with combined capacities to refine 1.429 million barrels of crude oil per day. “If the policy is genuinely pursued, the construction of the refineries ought to be completed within the 9-12 months. If such refineries are established in the country the importation of fuel and the fraud associated with it will stop.” He also protested that, “in the interim, instead of importing oil from Europe and the United States, the NNPC should refine crude oil for domestic consumption in neighbouring countries which have functional refineries;” noting that, “after all, Nigeria refines 60,000 barrels of crude oil per day in Cote d’ivoire which is not an oil producing nation.”

Falana also protested that “if subsidy had been removed over a month ago and the country has been saving $2 billion (from fuel importation and subsidy removal) while the refineries are now working at full capacity, Dr. Kachukwu should tell Nigerians the justification for the new removal of fuel subsidy announced by him week. The cost elements that make up the N145 are provocative. If the total landing cost of a litre and other charges are fixed at N138, what is the basis of fixing the price at N145? Why should motorists be made to pay NPA/NIMASA charges, demm within and without urage/storage/ bridging charges etc?”

Falana thereafter advocated that “At this stage, President Buhari ought to prevent neo-liberal ideologues from hijacking the administration for the purpose of punishing the Nigerian people for the looting of the treasury and mismanagement of the national economy.” he added that, “Contrary to the position of the parasitic ruling class that prices of goods and services be fixed by market forces, the federal government has a legal obligation to protect the people from exploitation.”

He also advocated that the federal government should, as a matter of urgency, abolish the monopoly in the importation and sale of diesel. There is no justification for the monopolistic control of goods and services under a free market economy, he argued.

Tinubu had remarked that over the years, the operation of subsidy was distorted to where it no longer functioned for the benefit of the masses but for the undue enrichment of a small club of businessmen, some legitimate in their work, some not. “Instead of remaining a positive aspect of the social contract, subsidy was transformed into an opaque haven of intrigue and malfeasance. It was turned into a shadowy process from which the unscrupulous extracted large sums of money without providing the services and products duly paid for.

Fake businessmen became true billionaires over night as if by supernatural force,” he contended.

The APC national leader stated that the rest of the nation, the innocent people, were left to face erratic supply and were made to groan in the misery of long fuel queues and the high costs and loss of time attendant to this situation. He said that to allow this unfairness to continue would have been a breach of the promise made by this government to the people.

Tinubu stated that “this administration entered office with a mandate of CHANGE. The government could not forever sit back and allow this dire inequity to continue, less it forfeit the essence of its mandate.”

“We all want fuel at a cheaper price. Under subsidy, we got the right price but not the fuel.

Meanwhile, some were getting rich on the common man’s predicament. They were laughing to the bank while the rest of Nigeria waited on the petrol line. This is not the way to democratic development. It is a recipe for creating a class of economic predators that would feed off the people and in time gain such power and wealth that they would seek to buy and control, if not own, government as well,” he had argued.

The APC leader declared: “President Buhari has with this decision put an abrupt and just end to the assault against our economy and political system. He has made a courageous and prudent decision. It is time to end fuel subsidy and begin to subsidise the true needs of the people.”

Tinubu emphasized that Nigeria has taken the historic step needed to create a competitive environment that that will eliminate smuggling, provide incentives for private refineries and attract foreign investments in the downstream sector and create employment. He added:

“instead of just shipping off oil and having the more expensive finished products sent back to us, Nigeria will move closer to realising its potential to become the plastic centre of the continent by manufacturing numerous by products. Nothing can stop Nigeria from being the net exporter of fertiliser from the bye products of the oil industry.”

Tinubu acknowledged that “this change will mean higher fuel costs, generally… however, it will lead to better supply and end the hidden substantial costs associated with long waits and delays for fuel. The days and hours of waiting for fuel will be a thing of the past.”

The APC national leader advocated that government must be vigilant to ensure that market forces are allowed to work properly and bring about a fair balance between supply, demand and longer-term favourable pricing. He admonished that collusion and manipulation of the market must never be allowed. Tinubu expressed the optimism that “If government sets the system fairly, it will ensure better supply and with it economic certainty.”