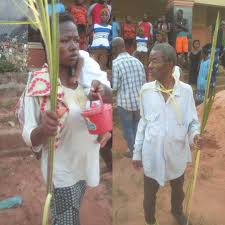 An man apparently in his late 60s, and her daughter have been banished from Okofia, Otolo Nnewi, Anambra for what the community believes abominable.

The daughter, pregnant, is nursing a baby boy, and her father is responsible for both.

The old man is a native of Okija, in Ihiala Local Government Area.

A Facebook user, Chinonso Okoro shared the news of the man’s banishment on the social media platform.

Another picture showed a bus in which their property was loaded, ready to be sent out of the community.

“Happening now at Okofia Otolo Nnewi the location of the Unizik college of health. This man from Okija impregnated his own daughter for the second time. Now they’re asked to leave Nnewi. Wonders shall never end,” Chinoso posted.

Rights activists in Nigeria and elsewhere frown at blaming or stigmatizing victims of sexual abuse.