Minister of State for Petroleum Resources, Timipre Sylva, has assured Nigerians that contrary to speculations in certain quarters, the federal government has no plans to stop fuel subsidy at the moment.

It would be recalled that an ad-hoc committee, which was set up by the National Economic Council, NEC, headed by Governor El-Rufai that included members of the executive arm of government recommended full deregulation of PMS prices by February 2022.

However, while addressing journalists on Monday, the Minister of Finance, Budget and National Planning, Zainab Ahmed, disclosed that the federal government has decided to suspend the recommendations of the ad-hoc committee which was the removal of subsidy on fuel.

NEC’s position came on a day former Head of State, General Abdulsalami Abubakar, Rtd, advised the Federal Government against withdrawal of fuel subsidy, saying any increase in the pump price of petrol would push more Nigerians into poverty.

Speaking on Tuesday, Sylva said that before the end of 2022, Port Harcourt refinery in Rivers State would become operational, adding that when it becomes operational, it would go a long way in the drive to finally remove fuel subsidy.

Recall that in March 2021, the federal executive council (FEC) approved the sum of $1.5 billion for the rehabilitation exercise of Port Harcourt refinery.

The repair, to be executed by Tecnimont SPA, an Italian company, would be done in three phases of 18, 24 and 44 months.

On the legality of the continuing payment of subsidy, six months after the signing into law of the Petroleum Industry Act (PIA), Sylva revealed plans for amendment.

He noted that the federal government would write to the National Assembly seeking an amendment to allow subsidy payment for the next 18 months.

A section of the PIA requested that by June 2022, the government stops fuel subsidy payments.

“I will not want to specifically mention the time of extension because that will be a product of a discussion with the national assembly because it is likely to involve an amendment of the PIA to extend the time for at least 18 months” he said.

The minister also reiterated government plans to convert one million cars to gas and create a similar volume of filling stations to avoid congestion. 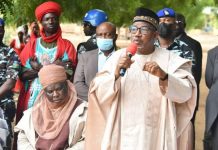