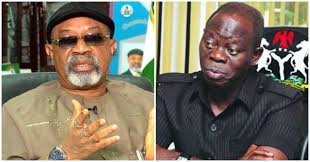 The All Progressives Congress (APC) may know no bound to internal crisis over the running of the party, and may be in for another round of fresh crisis. APC National Chairman, Adams Oshiomhole, is boiling for war with former Governor Chris Ngige of Anambra State and Minster of Labour, over the delay in inauguration of baord members in several agencies under the Labour Minister.

Oshiomhole, under the guise of articulating party supremacy, had a fortnight ago, ordered the Labour Minister to inaugurate board members appointed by President Muhammadu Buhari into the Labour sector who had been cleared by the Senate. The APC national chairman had argued that the action was necessary so as to ensure party loyalists participate extensively in the APC government, warning that APC members in government must comply with party discipline and will no longer behave in manner that suit them.

Ngige had, however, resisted the order of the APC chairman, insisting that he would not inaugurate the boards in the Labour sector on the directive of Oshiomhole.

The response provoked Oshiomhole who has threatened to suspend Ngige from APC at a time that party leaders are contending with how to prevent the R-APC members from defection.

There are strong indications that the two former governors would be heading to showdown which is beginning to generate fresh tension in addition to existing conflicts in the ruling APC.

Exposed! PMB, APC are using these three vices to lure us back – R-APC