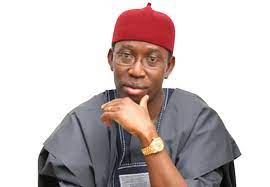 Delta Government has warned Lead Agents and Sub-Agents (supervisors) of the Government Enterprises Empowerment Programme (GEEP) and other stakeholders of the National Social Investment Programmes (NSIP) to shun sharp practices.
GEEP is part of the Federal Government’s NSIP designed to help alleviate poverty by providing access to funds for Nigerian entrepreneurs.
The Commissioner for Humanitarian and Community Support Services, Dr. Darlington Ijeh, issued the warning on Tuesday in Asaba.
Ijeh spoke during a meeting between GEEP and agents in the 25 Local Government Areas of the state.
He said that his attention was drawn to some identified lapses presently hampering the smooth operations of NSIP, mainly the Farmer Moni, Trader Moni and Market Moni.
“I know you all have been very effective in your various wards and local government areas.
“But my attention was drawn in December to some lapses that need to be covered,” he said.
He, therefore, warned against any form of irregularities that fall short of the stipulated standard of the implementation process.
According to him, anyone caught cutting corners in the name of the directorate or the programme would be brought to book.
“We must work as a family, otherwise, we will not succeed,”
the commissioner said.
He said that any lead agent that exempted themselves from the meeting without proper approval from his office would be severely sanctioned.
Ijeh, therefore, directed all lead agents to submit a written document on the challenges they were facing in the discharge of their duties.
He promised to look into issues concerning their emoluments with a view to increasing their quarterly earnings.
“You heard what I did for the cooks in the National Home-Grown School Feeding Programme.
“You know what their stipends used to be and what makes you think I cannot do the same for you?
”I can replicate it but on one condition that we must work as a family.
“So, I beg everyone to please work as one family,” he said.
The Permanent Secretary in the programme, Dr Ejiro Ogheneaga, advised the lead agents and sub-agents to avoid falsehood and unauthenticated claims, when writing their mandatory reports.
Ogheneaga said that the reports should be brief and straight to the point.
“The report you are writing should be authenticated because if you submit anything that you are not sure about, the repercussion would be very grave,” he said.
He urged them to always ask questions in whatever area they considered ambiguous.