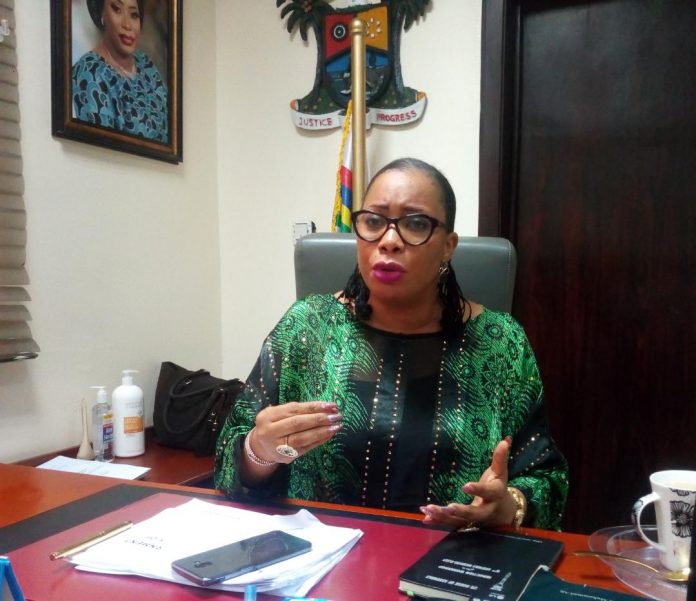 One of the three female lawmakers elected as a member of the Lagos State House of Assembly, Hon. Mojisola Alli-Macaulay has lauded the level of inclusiveness and move towards gender balance in Gov. Babajide Sanwo-Olu led administration which featured 14 women in his cabinet.

Hon. Macaulay said that the number of women in the state executive council sworn-in on Monday by Sanwo-Olu remains the highest in the history of the state.

Alli-Macaulay representing Amuwo-Odofin Constituency I, express the fact that such development elates women and inspires them to be politically active and derive the drive to aim high in life.

“I am joyous; this is the first time in the history of democratic process in Lagos. We have 14 women emerging to become members of this executive cabinet. I am so glad, it is wonderful news. This landmark achievement that Gov. Sanwo-Olu has registered in the mind of millions of women all over the federation is not a celebration for women of Lagos alone, but a yardstick of hope for women even in other states.

“I want to appreciate the leadership of the All Progressives Congress, most especially of National Leader, Asiwaju Bola Ahmed Tinubu and the new governor for taking this highly impressive milestone in changing the narrative.

“A lot of women happen to be pathfinders in term of electoral processes, during elections; women are all out to cast their votes. They work assiduously during campaign periods”.

“Women go through a lot of assaults, face a lot of domestic challenges and never relent in their “wholehearted participation” during electoral processes.

The lawmaker described the state as a real progressive state that set pace for other states in new ideas. She commended the leadership of the state for acting differently and responding to the yearnings of women.

“We must know that having women in governance is something that other state should emulate. When we have women in government, it is just a way to cushion the government to do more. If you want things said, get men to say it; if you want it done and really serious about it, get the women to do it. Women are natural multipliers, divine incubators.

“A woman will put her life on the line to ensure that something is done,” she said.

The lawmaker commended Sanwo-Olu for not turning his back against the promises made during campaigns for women.

She, however, advised the women in the cabinet not to disappoint the trust and confidence reposed on them while not allowing their family and marriages to suffer.

She said that the country needed more women in politics to move forward, urging men to release and support their wives.

On plights confronting women, the lawmaker urged the governor to give special and adequate attention to the cause of women through the Ministry of Women Affairs and Poverty Alleviation.

The lawmaker, who expressed confidence in the competence, experience of the newly sworn-in Commissioner for Women Affairs and Poverty Alleviation, Mrs Bolaji Dada, said the Lagos women needed more empowerment.

“We have so many women who are not yet covered. Women should not relent in their push to be emancipated, they should keep pushing and there is going to be a balance eventually.

“I want to urged the governor should look deeply into caring for women, he should come up with more empowerment programmes that can carry a wide spread of women being emancipated at a go. When women are empowered, you have empowered a nation.  We want more women to be empowered,” she added.

It would be recalled that Gov. Sanwo-Olu on Tuesday sworn-in 35 commissioners and special advisers into the state executive council out of which 12 were women. One of the three governor’s nominees, who were declined confirmation by the House on Monday, was also a woman bringing the number to 13.

Meanwhile, the governor had earlier appointed a woman, Mrs Folashade Jaji, as the Secretary to the State Government bringing the number of women to 14 in all.