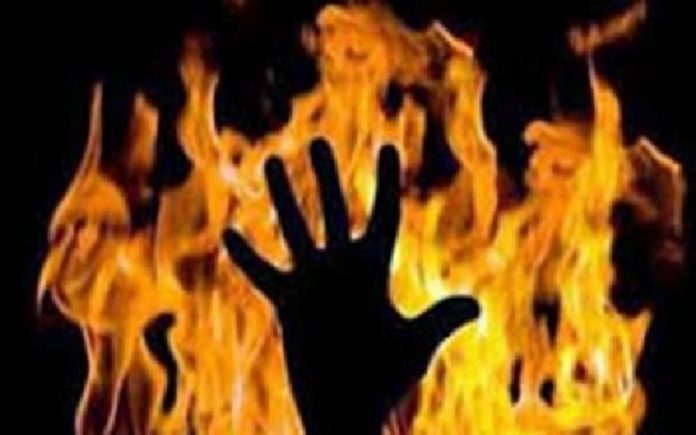 An 80-year old man, Louis Onwumere, has set himself ablaze in Ezinihitte Mbaise Council Area of Enugu State, an act considered an abomination in the community.

The grandfather who retired many years ago as a staff of the School of Arts and Science in Rivers state was said to have poured petrol on his family house before allegedly striking a match and burning himself to death.

Although natives described the ugly incident as an abomination, first of its kind in the village, they could not pin-point anybody with whom he had any quarrel or fight to warrant such a bizarre action.

According to a source in the village, who added that they told the police “we are not suspecting anybody and we don’t want trouble, ” the octogenarian, whose wife still resides in Port Harcourt, had waited patiently for the rain to stop before allegedly executing his plot.

It was gathered that the entire 3-bedroom and a sitting-room bungalow – the rooftop, the walls and everything – were burning at the same time, suggesting that he might have spread petrol or kerosene on the house, our source said.

Our source said it was when the inferno died down, that the burnt corpse of the deceased was seen in one of the rooms “apparently suggesting that the old man must have been moving about naked in the room when the raging fire became unbearable to him.”

According to a villager, the real owner of the burnt house is his immediate younger brother.

“The man returned from Port Harcourt about 30 years ago. He was not living with his wife or any of the children. He bought enough fuel and poured it up and down the house. As soon as the rain stopped, he used the opportunity to do the thing,” a villager said.

A leader in the village, who is also a member of the traditional rulership, Eze’s cabinet, Nze Nicholas Nwokoleme, said the villagers are not happy about the incident.

Nze Nwokoleme, who spoke on telephone with our reporter said: “We are not happy about the ugly incident. That’s all I can say now.”

A youth leader, Mr. Jude Ndukwe said: “it’s a very sad thing but I was not there when it happened. Some people called me and told me about it on the phone. But before I could reach the place, the damage had already been done and the corpse of the deceased had been deposited in a mortuary. It’s sad but this type of incident has not happened in our place before.”