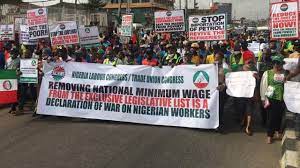 A group, the Federal Workers Forum, has accused the Minister of Labour and Employment, Dr. Chris Ngige, of being insincere in the promise for salary increase for federal workers.

The Federal Workers Forum in a statement by the Convener, Comrade Andrew Emelieze, former Oyo State TUC Chairman, and former
member of TUC National Executive Council (NEC), emphasised that the recent pronouncements of the Minister of Labour, Dr Chris Ngige, over concerns for the salaries and allowances of federal workers in Nigeria have shown clearly that government is not sensitive to the welfare of its workforce.

The Forum stated that the labour minister has been contradicting himself, saying one thing today and denying it the next.

“The Minister has been going forward and backward at the same time but has remained at the same place saying nothing in so many ways.

“At a time, he is saying that federal workers salaries will be increased based on existing social reality, and at another time he is denying his assertion with a position that what government intends doing is the review and full payment of federal workers allowances. The questions federal workers are asking is that what allowance is the Minister talking about,” the Forum declared.

The group noted that the conflicting positions of the Minister speaks volume of how well the federal government has handled the welfare of federal workers, who, of course, are the engine room of governance.

“Federal workers are no slaves and we are unhappy that despite our perseverance with our horrible conditions of living and age long suffering in silence in the face of poor pay and excruciating economy that the Minister of Labour will be playing games with the wellbeing of federal workers.

“The Minister of labour has not been able to come out straight with the intentions of government to address the plights of federal workers and indeed that of the Nigeria workforce in the face of ugly socioeconomic crisis confronting workers amidst failing economic realities and high cost of living in Nigeria.

“As a matter of fact, the unilateral pontification of Ngige is highly suspicious. “We believe that the issues of wages adjustment must involve workers’ union and not a unilateral and dictatorial imposition.

“Our position at the Federal Workers Forum is that our government should pay federal workers at least 30% of their monthly salaries as cost of living allowance. We have seen lots of this kind of allowances paid to workers as a stimulus to cushion the effects of the high cost of living crisis in other countries. Nigerian workers cannot be left behind,” the statement read.

The group lamenting that federal workers have suffered enough, declared: “we have endured with government, it is time to come to our rescue.

“We call specifically  on President Muhammadu Buhari to break silence and not to keep quiet over the sufferings of federal workers, we expect the President to act fast now else federal workers nationwide will have no other option than to protest our plight. Mr President should also note that we had earlier given 14 days ultimatum for protest if government refuses to do the needful. We will not give any other ultimatum but will be spontaneous to protest if the needful is not done.

“There is also a need for President Muhammadu Buhari to ensure the payment of all outstanding arrears owed federal government workers before the termination of this administration.

“We also call on President Buhari to immediately halt the hike in electricity tariffs and fuel price increase.

“If we must be fair to Nigerians, President Buhari must also forensically investigate the subsidy regime and make public those behind the subsidy fraud in Nigeria, as the subsidy crimes has contributed largely to the sufferings of the Nigerian workers.
While we look forward for urgent response from government to address the hardship faced by federal workers in the shortest possible time, federal workers are called upon to start preparing their minds for a national protest in solidarity.”

OPC distances self from Ojota mayhem