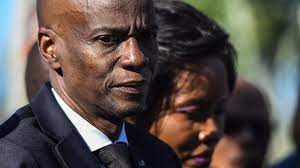 Exantus provided no other details, such as how many suspects had been arrested. He said additional details would be released soon.

A manhunt ensued after the shooting death of Moise at his private residence in a wealthy suburb of the capital, Port-au-Prince, before dawn on Wednesday

“Those killers are on the loose,” Haitian Ambassador to the United States Bocchit Edmond said Wednesday during a briefing with reporters covering the State Department. “We are calling for an international manhunt.”

Edmond said Haiti would request U.S. assistance and expertise. “A stable Haiti is in the interest of the United States,” he said.

Haiti’s border with the Dominican Republic and its airports are closed, the ambassador said. Edmond said officials suspected the attackers were either still in Haiti or had escaped over the border. He ruled out the possibility of an escape via air, saying it would have been virtually impossible to evade the country’s air surveillance system.

Interim Prime Minister Claude Joseph declared a state of siege and said he was now in charge of the country.

Asked by VOA whether officials know the nationality of the gunmen, Edmond said he was unsure, but based on video footage obtained by the national police and deemed credible, the assassins, whom he described as “mercenaries,” posed as agents of the U.S. Drug Enforcement Administration.

“They are speaking Spanish and presented themselves as DEA agents. As we well know, this is not the way the DEA operates. I believe they are fake DEA agents. Experts who saw the video said those are professional killers,” Edmond told reporters.

First lady Martine Moise, who was shot during the attack, was in stable but critical condition, the ambassador said. She has been transferred to a hospital in Miami, Florida, for treatment. One of the president’s children who was at home during the attack has been taken to a secure location.