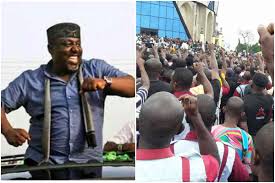 The Happiness Governor of Imo State, Anayo Rochas Okorocha, on Tuesday, declared automatic promotion for all workers in the state civil service, with the exception of those who are newly employed.

Okorocha in his address at the 2018 Workers’ Day celebration, held on Tuesday at Heroes Square, Owerri, said that in addition to the automatic promotion, because of the fondness he has for the workers, he could also approve sleeping allowance for them.

The Imo Governor has become renowned for absurdities in governance. He spent state funds erecting status for certain African leaders in Imo who added no value to the development of the state.

It was gathered that there was low turnout of workers who perhaps, resolved to use the occasion to protest months of unpaid salaries by the Imo State Governor.

The governor had declared: “I have, therefore, approved an automatic promotion for all workers of Imo State.

“This is because since I became governor seven years ago, you have not been promoted.

“Without you, the activities of government would be crippled. You are the engine room behind all our successes.

“I thank you for your patience. You are so dear to me. I can even approve sleeping allowance for you.”

Again, in announcing the automatic promotion of all workers, the state civil service commission was not given the mandate to screen the various categories of workers to ensure that they are all qualified for promotion. Accordingly, the Imo governor breaches due process in promotion of workers.

However, Okorocha promised that his administration would comply with whatever decision is reached between the Federal Government and the Nigerian Labour Congress on new minimum wage being negotiated for Nigerian workers.

The governor said that his administration had approved new salary structure for the workers, though he did not provide the details.

Paul Akalazu, State Chairman, Trade Union Congress, on behalf of Organised Labour in the state, told the Imo governor to immediately commence payment of 100 per cent salaries for all workers in recognition of the sacrifices of the workers during the economic recession.