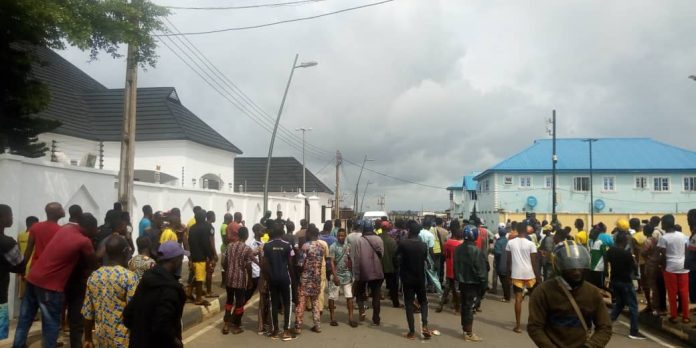 The residents of Epe, Lagos State, on Tuesday morning came out massively to stop operatives of the Economic and Financial Crimes Commission (EFCC) from raiding the residence of former Governor Akinwunmi Ambode of Lagos State which is located their community.National Dailylearned that Epe residents got the wind of the arrival of the EFCC officials at Ambode’s residence on Tuesday morning, and at no sound of any trumpet, the people rushed out from their homes down to the former governor‘s residence where they resisted the anti-corruption operatives from gaining access into the residence. Thereafter, they were said to have ordered them to exit their community.

Reports indicated that while operatives departed with their vehicles, there were sounds of gunshot but the sources could not be confirmed.

EFCC Acting Media and Publicity Director, Tony Orilade, had later on Tuesday denied that the raided the residence of the former Lagos State Governor, insisting, however, that Ambode is under investigation like others governors whose immunity had elapsed on their exit from office.

A Federal High Court in Lagos had last week ordered that three bank accounts allegedly linked to the former Lagos State Governor with N9.9 billion deposit be frozen, as the judge gave ruling on an ex parte application by EFCC.

Former Governor Ambode had denied ownership of the said accounts, saying he has no personal links to the accounts.