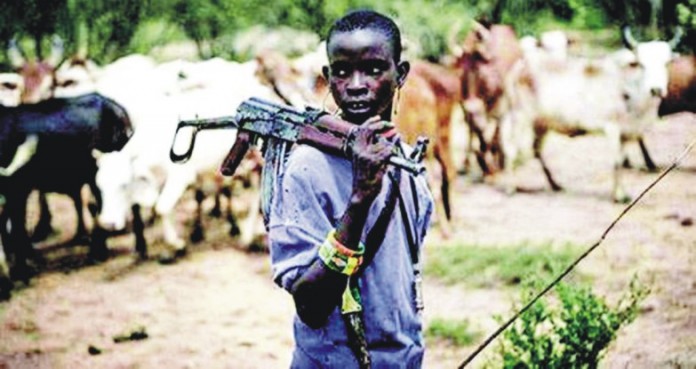 Tragedy struck barely 72 hours after stories filtered into the open that no fewer than 500 armed Fulani herdsmen had sneaked into the community to launch an offensive. About seven villages in Nimbo (Nimbo Ngwoko, Ugwuijoro, Ekwuru, Ebor, Enugu Nimbo, Umuome and Ugwuachara) were among the areas attacked.

Ten residential buildings and a church, Christ Holy Church International, aka Odozi Obodo, were also said to have been razed by the herdsmen just as vehicles and motorcycles were destroyed and domestic animals killed.

The young man, Samuel Udobang, recounted how he lost his parents and one of his cousins in a gruesome manner: “They came into the house to drag me and my family out and started butchering my parents. I managed to escape. My cousin was also unlucky as they burnt him inside a commuter bus belonging to one Ejima, son of a prominent man popularly called ‘Are you there’ near the Christ Holy Church, Nimbo”.

Kingsley Ezugwu, a former Councillor in Nimbo Ward 2, was one of the victims of the attack. Speaking from his hospital bed in Nsukka, Ezugwu said: “I was coming out from the house when I heard the community bell ringing. I was going with a friend to know what the bell was all about, only to see about 40 Fulani herdsmen armed with sophisticated guns and machetes. “They pursued us, killed my friend and shot at me several times but missed. They caught up with me and used machetes on me until I lost consciousness.”

He said one of them later discovered that he was alive and called on the others to finish him off. They ignored him. He said he crawled until a good samaritan helped him to the hospital.

So far, six dead bodies have been recovered and deposited at Bishop Shanahan Hospital, Nsukka, while others, who sustained injuries were rushed to Royal Cross Hospital and Enugu State District Hospital, Nsukka. Meanwhile, villagers and other residents of the area have fled the town.

A source, Ariaku Emeh Iroh, told this newspaper about the efforts the Enugu state Government made towards averting the situation. It was said that Governor Ugwuanyi got a prior information that Uzouwani would be attacked as some herdsmen from Nassarawa were converging near the community.

“There was a call made by Ifeanyi Ugwuanyi to the president, he was put on hold for over an hour 15 minutes. This call was made in the presence of 13 men and 4 women, the presidential aide told the Governor that the president will get back to him.

‘The president, through his aide, after four hours told Enugu state governor that the president will do something about it. Ifeanyi Ugwuanyi on hearing that the police have not arrived at Uzouwani called GOC 82 division for help. He was referred to the presidency again”.

Our source went further to narrate that this time around, the Governor was put on hold for nearly two hours. While still waiting to speak with the president,news came in that the attack he was planning to prevent had actually taken place. Within an hour, the commissioner and GOC who referred the Governor to the president earlier had mobilized their men to stop retaliation.

The same way Lagos and Agatu were attacked and retaliation prevented.

Orji Uzo Kalu had used the media to avert this type of mayhem in Okigwe during his tenure. His face off with Obasanjo made him bypass OBJ and went on air. Abia people were forced to prepare and the Fulani men went back home.

“Put the call before public media , have it taped and watched and monitored all over the world and Uzouwani citizens would’ve rushed back home in their millions to protect their relatives. The world will see how a tyrant values the lives of his people”.

Rochas Okorocha in its reaction to the development, said what happened at Ukpabi-Nimbo is like any other national issue that deserves the understanding and cooperation of all Nigerians of goodwill to tackle. The Chairman of the South-East Governors Forum, speaking through his Chief Press Secretary, Sam Onwuemeodo, said: “It is a national issue that also requires national approach to resolve.’

“Our problem in this country is that whatever happens is given an ethnic colouration and that makes the solution to such problem somewhat difficult.”