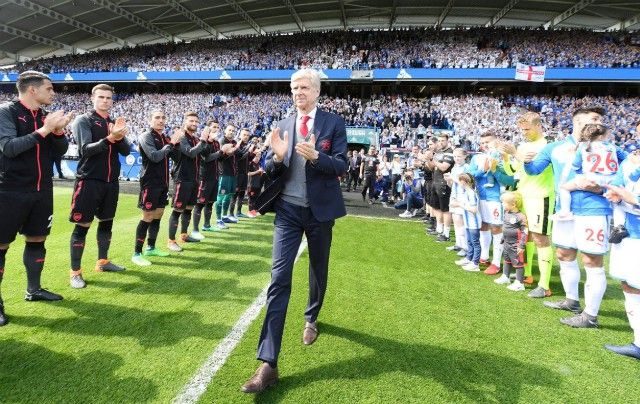 Arsene Wenger’s tenure at Arsenal is coming to an end, and while the tributes flood in from Arsenal fans, Huddersfield supporters have trolled them.The French tactician took charge of his final game at the helm for the Gunners in their trip to Huddersfield on Sunday, as he prepares to step down after 22 years in north London.

Wenger hasn’t enjoyed the greatest of relationships with sections of the Arsenal faithful in recent years given their inability to compete for major honours.

That has seen protests and banners inside the stadium as well as the infamous plane being hired to fly a ‘Wenger out’ message last season, but there was a more positive tone this weekend.

Coupled with chants from the travelling fans showing their support for Wenger on Sunday, Huddersfield supporters shared their thoughts on the matter and made fun of the fact that so many Arsenal fans are suddenly changing their tune.

In truth, it’s not like they’re going to insult Wenger in his last game in charge as there is certainly still respect there for the job he has done over the past 22 years. That didn’t stop the Huddersfield fans from having some fun though…