In the world of digital footprints, Yoruba agitator Sunday Adeyemo has problem covering his tracks, and he doesn’t know its implications.

After the DSS invaded his Soka home in Ibadan, Oyo in a fatal shootout June 30, and carted away no fewer than 13 guns, including AK47, Sunday Adeyemo and his Facebook handler Olayomi Koiki have claimed it’s all persecution.

“They either planted the ammunitions being paraded in the media in my home or harvested them from their armoury to frame me,” he said in a press statement from his hiding on July 3.

“The arms paraded are not mine, they are government magic. I protect myself with traditional powers, not with guns.”

“If they don’t know where to buy guns, I do,” Igboho spoke in Yoruba in the palace of a traditional ruler during one of his campaigns for the Oodua Republic.

“Let’s raise money and buy for those who can’t afford guns. Tell the federal government I am responsible.”

The self-incriminating video was water-marked by his media aide Koiki.

Being a man of his word now perhaps could have been easier for him to counter the allegations that he stacked up the weapons the DSS they recovered from his house.

After all, Nigeria’s Defence Minister Bashir Magashi once challenged Nigerians to defend themselves against killer herdsmen and bandits, though he didn’t call for arming with AK47.

President Muhammadu Buhari gave a shoot-on-sight order on illegal AK-47 gun bearers months ago, and he insists the order remains in force. 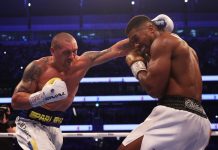