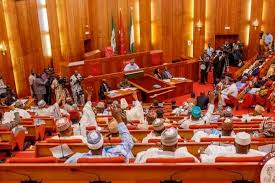 The R-APC senator was paritcularly angered by the helplessness of the victims.

His state has witnessed hundreds of killings by armed bandits in 2018. Several houses and properties were also burnt and destroyed by the criminals during the attacks.

While contributing to a debate at the Senate on the insecurity across Nigeria during the week, the senator called for legalisation of guns and firearms to enable citizens defend themselves.

According to him, the only advantage the criminals have over their victims is the guns and weapons they carry.

Marafa has decried the killings across the country, and called for the intervention of the federal government in crisis-affected areas of the state.

He has also openly accused the state governor, Abdul’aziz Yari, of playing politics and blame game with the incessant killings in the state.

On the floor on Tuesday, the senator also ripped into religious leaders that give ethnic and religious cooiration to the killings.

“There are killings in Zamfara and those arrested are not all foreigners or Fulanis. I make bold to say that the killings in Plateau State are happening in conjunction with indigenes of that state because it is a business. But every day, we either give it an ethnic or religious colouration without minding the fact that these things are being done and we are the losers.

“The Christian and Muslim clerics that are giving these killings a religious colouration are all hypocrites because we all know where they belong to. It is not limited to one religion but at the end of the day, the problem remains,” he said.

He then described the attacks as “a grand agenda by other lawmakers that want state police.”

Other lawmakers were however angered by that statement, and called for ots withdrawal.

Marafa apologised, and withdrew his statement.