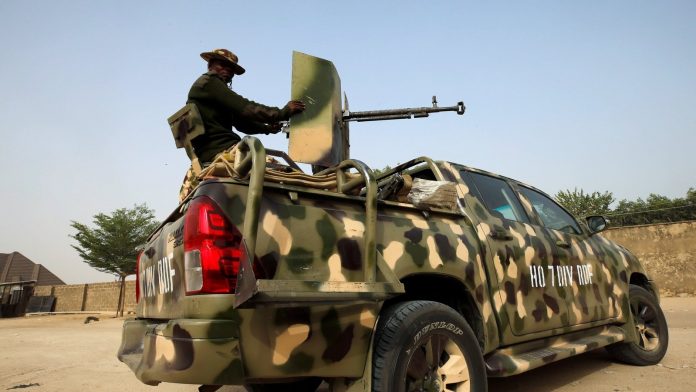 The Theatre Commander, Joint Task Force (North East) Operation Hadin Kai, Maj.-Gen. Christopher Musa, says the military will continue to push harder in the fight against insurgency until there is total peace.

Musa stated this while addressing journalists from Abuja who are on media tour to Maiduguri on the progress in the fight against insurgency in the north eastern part of the country.

Musa said that the theatre of operation had sustained tempo of its operations to root out the Boko Haram and Islamic States West Africa Province (ISWAP) terrorists from the zone.

He said that tremendous achievements had been recorded since the assumption of command of Nigerian Army by Lt.-Gen. Faruk Yahaya and his own appointment as the theatre commander.

According to him, the operation started in 2009 and any operation that lasts more than a decade, there is a serious issue to it.

“It is the intention of the chief of army staff to see that they put an end to the menace.

“A lot of innocent lives have been lost and developmentally, the region has gone backwards many years and it will take a long time before it can recover,’’ he said.

The theatre commander solicited the support of the media and citizens, especially the locals to make it difficult for the terrorists to operate, adding that media and locals were important factors.

“Some of the surrendered insurgents will tell you they don’t even understand how they are surrendering and coming out in droves,” he observed.

Musa, who acknowledged the apprehension of people over the development, assured Nigerians and people of the region that the surrendered terrorists would be properly handled.

“I know there will be apprehension definitely but we are not taking anything for granted; we remain focused.

“Part of our training and part of our laws in rules of engagements is that even when you are fighting somebody and he surrenders you cannot shoot him and when you get him, you have to treat well, you will give him shelter just like any other person.

“But most people don’t really understand and they look at them and say we are pampering them.

“No, we are just doing what we are supposed to do but the law will naturally take its course.

“That’s why we were able to talk to the government and advised it to call the stakeholders meeting which was held about three weeks ago.

“One thing I told them is that whatever it is we are doing, we must sit back and reflect on how it started, what were we doing and how do we prevent it from happening in future.

“If we don’t address the causative factor then we are bound to go back to them.

“So, it is important that as we are doing what we are doing now, we should also sit back and assess why it happened,’’ he said.

The theatre commander urged the media to continue to support the effort of the military, pledging that the theatre would continue to avail the media the needed information regarding its operations.

Earlier, the Director, Army Public Relations, Brig.-Gen. Onyema Nwachukwu, informed the commander that the media tour was part of effort to get media acquainted with recent happenings such as recent surrendering of terrorists.

Nwachukwu said that activities of Operation Hadin Kai had continued on the front burner in the media domain.

He said that the media tour was informed by the desire to bring to inform the public on the efforts and successes of the military in the fight against insurgency in the north eastern part of the country.