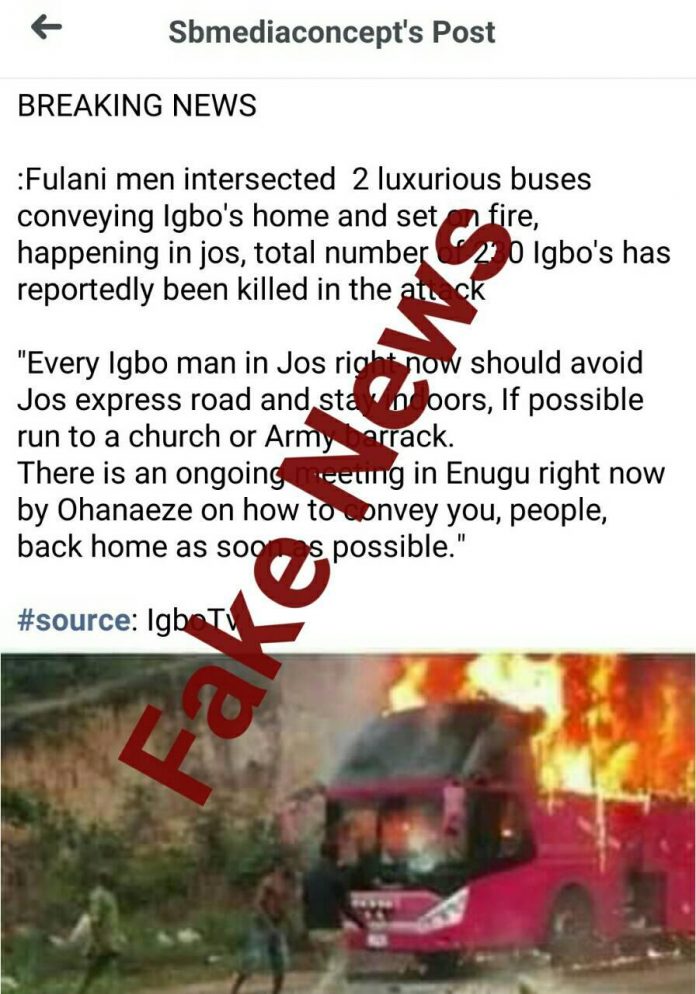 The Plateau state Police Command has described as mischievous and fake, a social media report that alleged that Fulani men attacked two luxury buses on Jos expressway, killing 230 Igbos in the process.

Spokesman of the Command, ASP Ubah Ogaba in a statement on Sunday said the social media reports which claimed two luxury bus conveying commuters of Igbo extraction were set ablaze, with the 230 passengers killed, in Jos was a fake report intended to cause ethnic crisis in the state.

Ogaba maintained that the report was malicious and an attempt by mischief makers to stir up ethnic conflicts in the state and the country at large.

The PPRO therefore called on members of the public to disregard the dangerous rumour or fake news and go about their lawful businesses.

“The command hereby states categorically that there is no record of such incident anywhere in Jos.

“We urge members of the public to disregard and stop the spread of such fake news capable of inspiring unwarranted panic, hatred, negativity, chaos and tribal conflict among the well-spirited residents of Plateau and Nigeria in general.

“We enjoin all citizens to cooperate with the Police and other security agencies by providing prompt and useful information that will help to enhance the security of the state rather than spreading unverified information capable of heating up the polity.

“On this note, we wish to reaffirm our resolve toward the provision of adequate security within the state and even beyond,” he said.

The spokesperson also urged residents to report all suspicious movements, emergency or distress to the nearest police formation for prompt response.