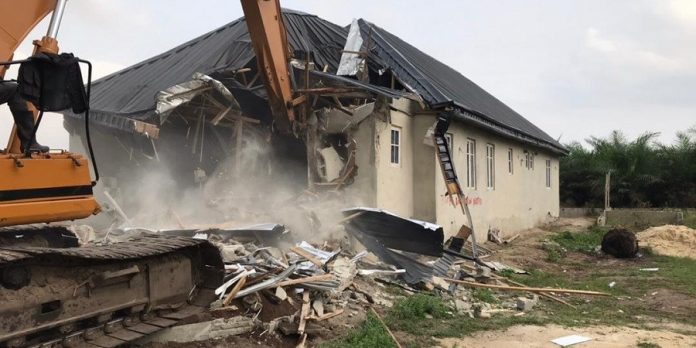 The Lagos State Government has issued notice of demolition to occupiers of illegal structures at Ikorodu roundabout. The state government on Thursday explained it will commence demolition of structures along the Right of Way on the roundabout in Ikorodu to pave way for public works on traffic facilities in the area.

The Commissioner for Transportation, Dr. Frederic Oladeinde, in a statement on Thursday, indicated that the demolition exercise would be done on Monday and Tuesday next week, to clear space for the junction improvement traffic diversion plan scheduled for the midnight of September 17.

Oladeinde stated that the demolition would be done in phases, noting that the first phase would be along the CAC Road Junction to Ayangburen Road on Monday morning, while the second phase would cover AP Filling Station inwards Sabo in the afternoon.

The commissioner said that the demolition exercise on the second day, would be at the Sabo Police Station, Central Mosque, Conoil, and Ayangburen Road from morning till afternoon.

He indicated that though the demolition would not impede on traffic flow, the state government has, however, made arrangements for alternative routes to reduce pressure that may occur during the demolition exercise. He notified motorists of the situation before the commencement of the project that would last eight months.

“Motorists heading inwards Ayangburen from CAC can alternately utilise Ayedere Owowu Road by GTB to make an exit at Etunreren to reach their destinations, while motorists inbound Ketu/Lagos axis from AP Filling Station are advised to use Suleiman Soderu Road and make an exit at Awoshode Street.

“In the same vein, traffic inbound Central Mosque and Ayangburen from Ikorodu Police Station can alternately use Adeniran Ogunsanya Road and exit Sabo Sagamu Road while Lagos bound motorists can make a detour at Suleiman Soderu Road to access their destinations,” the commissioner highlighted.

Oladeinde reiterated that the exercise is organised in phases to ensure the safety of the motoring public, as well as the contractors on site.

He assured that road signs, barriers, and caution guards would be mounted along the affected sites to guide traffic flow inbound and outbound the Ikorodu Roundabout.

Oladeinde appealed for the cooperation of residents with the state government to ensure successful commencement and completion of the project within scheduled time.