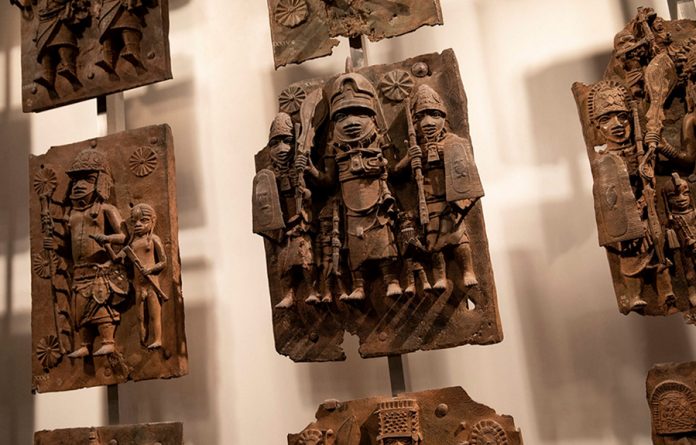 The Permanent Secretary of Nigeria Ministry of Foreign Affairs, Gabriel Aduda, at the Inaugural Nigerian Cultural Show for the exhibition of the country’s diverse cultural heritage, sites and traditional festivals at the Cultural Centre, Nigeria House, New York, disclosed that the repatriation of the artefacts will stimulate the building of an ultramodern museum in Edo, including training of curators.

Gabriel Aduda noted that the negotiation between Nigeria and Germany on the return of the looted Benin Bronzes had reached an advanced stage.

The Foreign Affairs Perm Sec noted that the Foreign Affairs Ministry has been in the vanguard of the negotiation for the return of the thousands of Benin artefacts from Germany, in conjunction with other Ministries, Departments and Agencies (MDAs) to facilitate the repatriation.

The Permanent Secretary narrated: “We are working with relevant MDAs; we have had several high level meetings with the Republic of Germany, and we are at a stage where thousands of art works are to be returned to Nigeria.

“There are over 7,000 different pieces of artefacts that the Republic of Germany wants to give back to Nigeria.

“We have talked deep into this that the reparation is not only at giving back, but they are coming to put a modern museum in Edo State, and they are training 25 curators that will man the museum for sustainability.

“We have gone far, and we are thinking that this will be concluded in October this year.

“We are hoping it will be a window to reach out to other European countries to return to us what was taken from us years back.”

Aduda acknowledged the role of the Consulate-General in New York in the inauguration of a Culture Centre and Library in April, filled with books, cultural artifacts, research materials and historic documents on Nigeria.

According to the Perm. Sec.: “I believe that we will leave this event with a better understanding of our country.

“Also, with a heightened sense of admiration for our rich and unique ancestral heritage that has been the bedrock of our unity as a nation.

“We are encouraged by your interest and being a part of our story telling today and I invite you to Nigeria to witness these festivals coming up later this year.”

The Perm. Sec. highlighted that  the Argungu International Fishing Festival and the Osun-Osogbo Festival featured at the event represent two of the many festivals in the Nigerian culture.