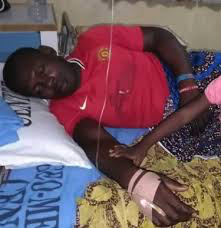 A staff of the Nigerian Aviation Handling Company (NAHCO), Tersuu Orhemba, who was last week allegedly hit with a plank on the skull by Customs agent at the cargo section of the Murtala Muhammed International Airport (MMIA), Lagos has reportedly suffered brain damage and slipped into a coma.

An official of NAHCO, who did not want to be named because he had not been authorized by the company to speak on the matter, said on Monday that Orhemba was lying critically ill at the Lagos State University Teaching Hospital (LASUTH) Surgical Emergency Department after suffering internal bleeding in his brain.

Narrating how the incident occurred, the official said an argument had ensued at the warehouse between the two when the Customs agent lost control and used a heavy wooden object to attack his victim. The Customs agent was said to have disappeared into thin air after the attack.

“He (Orhemba) was hit on the back by an unidentified person. He collapsed immediately after the incident and was rushed to the hospital.

“Medical report reveals that he has internal bleeding and will require surgery to clear blood stains in the brain.

“He is lying critically ill in the hospital. NAHCO will require to conduct thorough investigation or search to apprehend the person that caused this pain to this young man and guarantee safety of other employees of the organisation.

“If this is not done, the other staff of this orgahnisation are also at risk of been attacked the same way,” the NAHCO official said.

He said the matter has been reported to the police, which is yet to conduct investigation.