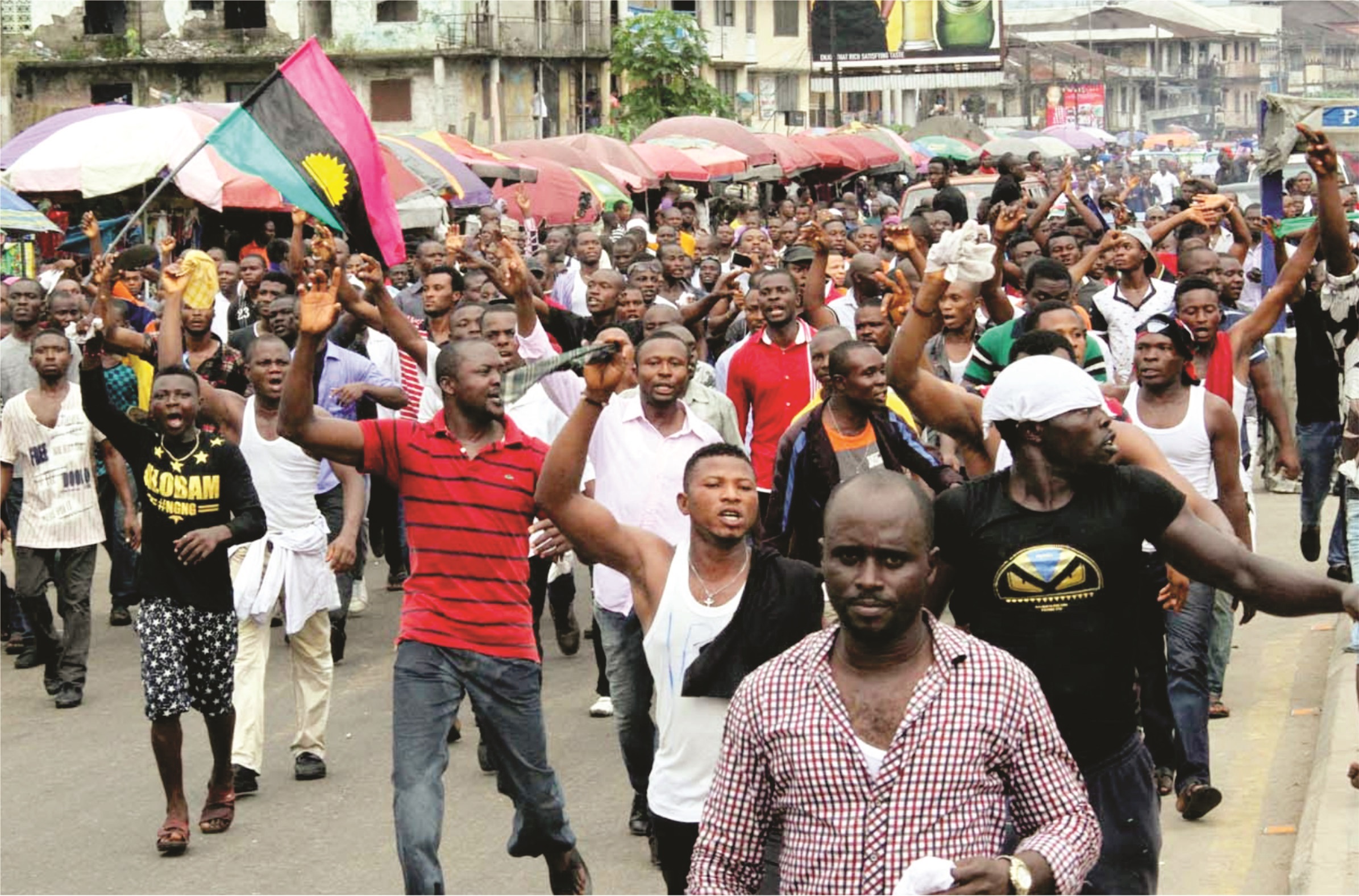 THREATS of disintegration has continued to traverse virtually every part of the country over perceived injustice or inequality in the dispensation of the resources of the commonwealth or government patronage. The Movement for the Actualization of Sovereign State of Biafra (MASSOB) has remained a major irredentist group that the Nigerian State has herculean task to contend with despite their non-violent approach to agitation for self-independence. Of course, members of the Movement believe that MASSOB represents a silent revolution waiting to explode one day.
Early this week, residents of Port Harcourt, Rivers State, were thrown into palpable fear when MASSOB members engaged in mass protest leading to the shutdown of Port Harcourt, in protest of the arrest of Nnamdi Kanu, Director of Radio Biafra, by security operatives.

National Daily observed that during the protest, business activities were paralyzed, shops, markets were forced to close, major roads in Port Harcourt were deserted while banks were shutdown.

MASSOB admonished that those who make peaceful change impossible make violent change inevitable. They protested: “We are not Nigerians; the struggle for the Sovereign State of Biafra will be actualized no matter the intimidation of the federal government and its agents. We are determined and one day Biafra will take over Nigeria. We enjoin President Muhammadu Buhari to recognize the Biafran Republic,” they declared. This was a declaration at a meeting of coordinators of Indigenous People of Biafra (IPOB) which took place at an undisclosed venue in Enugu, Enugu State, last weekend.

Participants at the meeting condemned the arrest of Radio Biafra Director, Nnamdi Kanu; they accused President Buhari very of using the Department of Security Services (DSS), which they said has been personalized by the President, to arrest Kanu, remanded for days before he was released on bail by an Abuja High Court.

The meeting was coming on the heels of a stern warning allegedly issued by 78 other countries that have sympathy for the Biafra cause, condemning the arrest. The countries were said to have warned that the arrest of the Radio Biafra Director could trigger diplomatic row between those countries and Nigeria. In order to avoid such row, Radio Biafra reported that the 78 countries have ordered President Buhari to release Kanu immediately and he was subsequently released in compliance with the foreign orders.

According to Ikye, “Buhari has been protecting sponsors of Boko Haram terrorists who have killed several easterners, particularly, Igbos in the North. Only for him to pounce on Nnamdi Kanu whose sin was that he aired his opinion on the wicked injustice against the indigenous people of Biafra by successive Nigeria governments.”

The IPOB top brass was emphatic that Kanu had not committed any offence, stressing that he was only asking that Biafra should be allowed to go as its people are not wanted in Nigeria.

The body warned that nothing should happen to the freedom fighter and gave the federal Government one week to release him. “If after one week he is not released, we would be forced to take action that Buhari government will not like,” the coordinators had declared.

Meanwhile, the movement for MASSOB has threatened to embark on worldwide protests, having commenced mass action in Rivers and Delta states. MASSOB remarked that the arrest of Kanu by the DSS was a provoked attack on Biafran people. “Nigeria,” the group said, “has finally played into the grand strategy of Biafrans.”

Expressing support for Kanu, MASSOB’s National Director of Information, Uchenna Madu, noted that the group’s struggle would be incomplete without arrests. He, however, stated that extra-judicial actions by the federal government against Kanu would rather cause public demonstrations by MASSOB members across the world.

The group recalled that Nnamdi Kanu was arrested on Sunday in Lagos by the DSS after three days of his return to Nigeria. The group condemned what it called cowardly arrest and detention of the Radio Biafra director, observing that members only engaged in non-violent struggle. “No agitation is complete without arrest, detention and prosecution. It shapes the mind of the activists, drawing sympathy from internal and external observers. It also showed that Nnamdi Kanu and Radio Biafra have become forces to be reckoned with in Nigeria,” Madu declared.

It will be recalled that agitation for the actualization of sovereign state of Biafra had been in low tune but resurfaced suddenly after the “overthrow” of President Goodluck Jonathan by the northern oligarchy in the March 28 presidential election.

Radio Biafra founded by Nnamdi Kanu has been playing critical role in the MASSOB struggle. Since it started broadcast, it has ruffled many people; especially, the Government of Nigeria.
Unfortunately, while protests were going on in Port Harcourt and Asaba, Delta State, on Tuesday, four people were shot and 15 others injured in Onitsha.

Emphasizing the indivisibility of Nigeria, Rivers State Governor, Nyesom Wike, said that the action of IPOB members are capable of stimulating chaos in the state.

He warned that as the Chief Security Officer of the state who swore to protect lives and property, he will not tolerate actions that will lead to breakdown of law and order in the state.

Dissociating himself and the state from the protest, Governor Wike warned that the coercive legal machinery will be set in motion against any group that will pierce the peace in the state.

He enjoined residents and all those transacting businesses in state to go about their lawful duties, assuring them of safety.