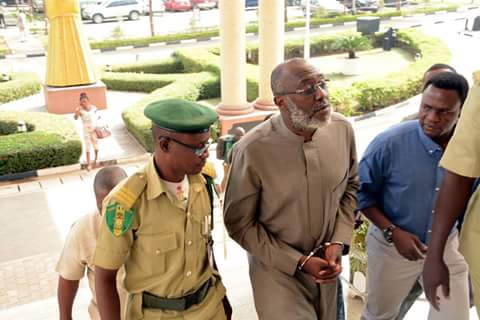 The mighty are falling in a renewed anti-corruption campaign orchestrated by the Economic and Financial Crime Commission (EFCC) with the  embattled National Publicity Secretary of the Peoples Democratic Party (PDP), Olisa Metuh appearing in court on handcuff Tuesday in Abuja.

Metuh, who was remanded at the Kuje prison last week was brought to the Federal High Court Abuja by the officials of Nigerian Prison Service amid tight security.

However, the Federal High Court ordered a stand down on the bail application. The judge, Okon Abang stood down the case for 45 minutes.

The court had ordered a stand down on the bail application of Chief Metuh.

Former Minister of Aviation and the national women leader of the PDP, Kema Chikwe was among friends of the PDP strongman who was in court.

On assumption of the case, the counsel standing in for Metuh, Emeka Etiaba prayed the court to stand down the case for an hour. Etiaba said the call for the break is to enable Metuh’s lead counsel, Chris Uche, who is attending to an election matter at the Supreme Court, appear in court.

The judge, Okon Abang having heard no objection from the prosecution said: “Since there are no objections from the parties, I hereby stand down this matter for 45 minutes.”

Metuh is accused of having collected N400 million from former president Goodluck Jonathan by the EFCC. The accused PDP spokesperson who accepted receiving such money from Jonathan has however refused to disclose details of the assignments he did for the former president.

Metuh has been in detention since Tuesday, January 5 and was also reported to have torn and chewed a statement he wrote at the EFCC

Nigeria signs agreement with UAE on stolen funds, Others