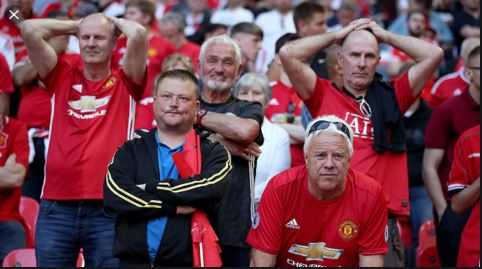 These are certainly sad moments at Old Trafford as their woes extend even outside the pitch.

National Daily gathered that one of the club’s major sponsors, Chevrolet reportedly want out of their £400million shirt deal with Manchester United.

The decision by Chevrolet is not far from the Premier League club’s well-documented struggles on the pitch.

The Red Devils who were once the dominant force in English football, have made their worst start to a Premier League campaign in 30 years and dropped to 12th in the table, two points above the relegation zone, after last weekend’s 1-0 defeat at Newcastle.

Those performances have caused concern for the American car manufacturer, who signed a staggering £400million agreement in 2012 when the club were consistently challenging for top honours under Sir Alex Ferguson.

However the Red Devils have endured a rapid demise ever since the seven-year deal came into play in 2014 and the Daily Mail has claimed that Chevrolet are unlikely to renew their deal when it expires at the end of next season.

It is understood that Chevrolet chiefs have been thoroughly unimpressed with the club’s performance over the duration of the deal, while it has also been claimed that the deal was never going to be renewed.

National Daily further learnt from The Daily Mail that a source told them that “It was doomed from the start. The feeling within was that Chevrolet had massively overpaid and it was never going to get done again.”

It has left United with a commercial headache, with Old Trafford chiefs already beginning their search for a new shirt sponsor from the 2021/22 season onwards.

Despite their woes in the pitch, United bosses believe that the club’s iconic red shirt still remains attractive to potential sponsors.

A United spokesperson said: “Chevrolet is a fantastic partner.

“The sponsorship continues to achieve the brand and business objectives for both parties and we will continue to work to activate and maximise it.”