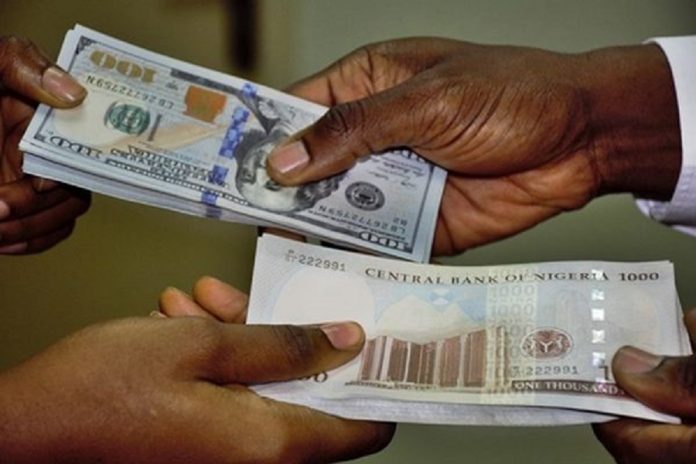 Naira appreciated marginally on Wednesday against the US dollar at the Investors and Exporters window, where forex is traded officially to close at N415.07/$1. This represents a 0.01% gain when compared to the N415.10 that was recorded on Tuesday, 26th October 2021.

The opening indicative rate closed at N414.44/$1 on Wednesday, representing a 40 kobo drop when compared to N414.04/$1 recorded in the previous trading day.

Meanwhile, the naira remained stable against the US dollar on Wednesday at the parallel market to close at N570/$1, representing the same rate when compared to the N570/$1 that was recorded as of the close of trading activities the previous day.

According to data tracked from FMDQ, forex turnover at the I&E window declined from $200.74 million recorded on Tuesday to $147.44 million on Wednesday 27th October 2021.

The price of Bitcoin  crashed on Wednesday morning, dropping by thousands of dollars in the space of just a few minutes as it fell below $59,000.

The world’s largest and most popular cryptocurrency, Bitcoin, was down by 2.29% on Wednesday evening to trade at $59,156.93 as the euphoria over the first US crypto ETF dissipated and traders took profits following a record breaking rally.

The global cryptocurrency market cap on Wednesday, October 27, was standing at $2.48 trillion on a day that emerging altcoin Shiba Inu registered record growth after an anonymous buyer purchased 277 billion tokens.

The total crypto market volume over the last 24 hours was $142.61 billion. This is a whopping 43.84% increase over the course of the last 24 hours, mostly due to the huge amount of Shiba Inu tokens purchased by an anonymous buyer.

The price crash in the crypto market was partly fueled by long-term holders taking some profits, which typically happens after Bitcoin hits a new all-time high.