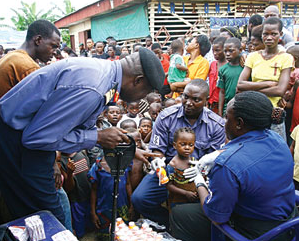 Share this on WhatsApp
The Nigerian Navy in Port Harcourt says it rescued a two-month-old baby and 11 others from drowning in Ngo waterways in Rivers. Lt. Ernest Jim, Base Information Officer, Nigerian Navy Ship (NNS) Pathfinder, Port Harcourt, made the disclosure on Friday.
He said troops on routine patrol of the waterways sighted a capsized boat and immediately intervened to rescue the 12 passengers. “The boat mishap happened at about 1330 hours on Thursday, March 28 around Nigerian Liquified Natural Gas (NLNG) Map Jetty in Ngo, Andoni Local Government Area of Rivers.
“It is gratifying to state that all 11 passengers and the baby were rescued with no casualty recorded,” he said.
Jim said the rescued passengers were later taken to a nearby NLNG medical facility for check up.
The Navy spokesman said that preliminary investigation showed that the boat was loaded above capacity, advising operators against taking passengers beyond the capacity of their boat.
Share this on WhatsApp