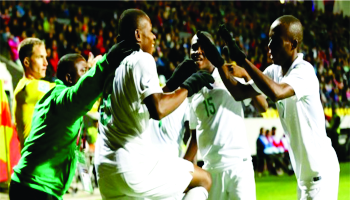 FOR the umpteenth time Nigerian football is on the threshold of history and there can be no hangover
As you read this, it is either the country is basking in euphoria of adding to her growing titles at the FIFA U-17 World Cup or enveloped by gloom of losing Sundays final in Chile to Mali.
However, what is most important is that whichever way the pendulum tilts there must be no room for festering.
Last Sunday’s game was another special one in the history of Nigerian football. But, it was not the first time in the history of the competition that two African sides clashed in the final. A supremely gifted Golden Eaglets met an equally impressive Ghanaian side in Japan 1993.
The two teams just like the ones that contested Sunday final were the pride of the continent as they scorched every opposition on their paths to set up the unprecedented encounter. That final had the likes of Nwankwo Kanu, Wilson Oruma, Celestine Babayaro and on the Ghanian side Osei Kufour on parade.
Success-starved Nigeria football fans will, understandably feel on top of the world for weeks and perhaps months in the event of the Golden Eaglets triumph while the NFF would tell anyone who cares how they went about this ‘amazing achievement’.
And in the event of a loss, the lads would be patted on the back with the dotting media awash with expectations from the usual ‘presidential handshake’.
Unfortunately, in the ensuing activities, the real import of the achievement of the young lads would once again be lost on all.
It was exactly what transpired when Nduka Ugbade-led Golden Eaglets stunned the entire football fraternity by emerging victorious at the maiden edition of the competition in China in 1985.
The  shaken football world was rocked and palpable fear gripped  the exclusive five that had dominated the the World Cup on the real danger Nigeria with such unprecedented landmark now meant to their firm on the global most beloved sport.
But did Nigeria seized the golden opportunity to cut a comfy corner for themselves in the game?
No!
Yes, the country even paraded a finer class of talents in the next edition of the tournament in Canada. Though, unlike their predecessors, the team failed to  replicate the triumph in China but lost controversially in the final.
The mercurial Phillip Osondu was head and shoulders above every other player in the tournament and was fittingly named the Most Valuable Player of the tournament.
The football’s landscape had changed dramatically since the early years of Nigeria’s reign. Other countries have reinforced their interest in the competition and now take it more seriously. France have joined the exclusive list of countries with World Cu titles.
Nevertheless, Nigeria’s fortune in the competition remains significantly bright. Frenzied efforts by various countries to unseat the Golden Eaglets as the numero uno at the FIFA competition, especially by the mighty Brazilians have been thwarted. Every edition of the competitions sees the Golden Eaglets drift away from the chasing pack.
But bizarrely, Nigeria’s undeniable supremacy at the cadet level is yet to translate to any meaningful upgrade in the international circuit.
From the pride of Africans that they were in the not too distant memory, the Super Eagles have become a shadow of the team everyone was eagerly looking forward to see at the World Cup. They are now precariously placed on the monthly FIFA rankings and have missed two out of the last three finals of the African Cup of Nations.
And more than any other time in the recent history of the game in the country, the reservoir of talent Nigerians usually pride themselves of seems to have dried up.
For close to two decades now, none of the country’s players has come close to emerging the African Player of the Year since Nwankwo Kanu won the accolade in 1999, yet, every other year, the Golden Eaglets’ beat up their peers with little resistance.
Indeed, one can be dismissed as a dreamer for dreaming that the Super Eagles could replicate the dominance that have characterised the Golden Eaglets appearances at the global cadet game.
Dimeji Lawal, a member of the  Canada 1987 team said: “Well it is a very difficult situation. The federation have a crucial role to play in ensuring that the potentials of the youngsters are on the long run harnessed for the good of the national team.”
“While it has be come extremely hard to stop players from traveling overseas for the greener pasture, there should be concerted efforts to keep the country’s players from traveling until a certain age. They should be nurtured in the local leagues until they are mature and ready for the bigger stage. This is what a lot of countries are doing and Nigeria cannot be an exception. As long as the country’s best prospects travel out to play in some obscure league, the country will not be able to monitor them.
“It is also important to develop the local league. No country can achieve its aims and desires of being the best in the game without a thriving local league.”
Lawal earned a  couple of international caps for the Super Eagles and never reached the lofty heights  he thought he would as a youngster but he feels a more robust and meticulous planning could help the current classes of Golden Eaglets achieve that.

Share this on WhatsApp
Related Topics:FIFA U-17 World Cup
Up Next