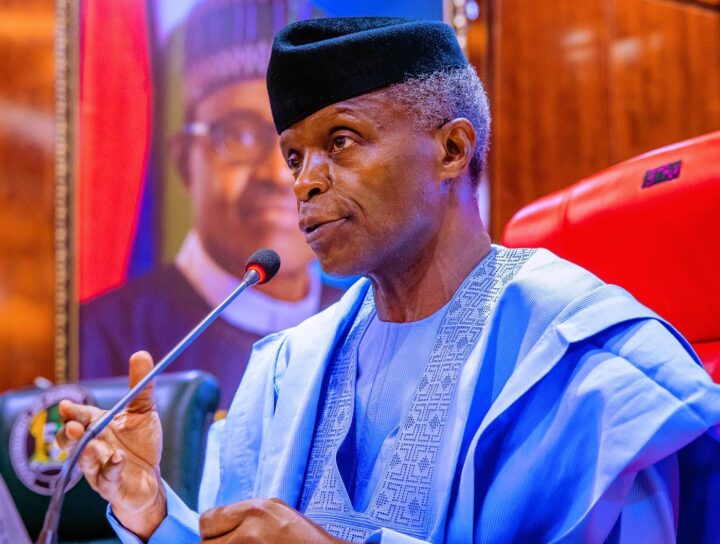 Osinbajo expressed this view in his address at the opening of the 28th Nigerian Economic Summit (NES) where he represented President Muhammadu Buhari on Monday in Abuja.

The 2-day summit, with the theme, “2023 and Beyond: Priorities for Shared Prosperity”, was organised by the Nigerian Economic Summit Group (NESG), in collaboration with the Federal Ministry of Finance.

The vice-president said that real improvements had been seen in the non-oil revenues but focus must be on productivity or encouraging value addition.

He said: “Productivity and value addition means creation of traceable value; it means jobs, and opportunities and it means more tax revenues.

“To increase productivity, we must free up our environment for business, make local and international trade easier by fixing the ports and effecting the National single window.

“We should also revamp our customs processes and tariff codes to reduce delays and arbitrariness, removing needless restrictions on imports to enable value added processes.’’

The vice-president urged that measures must be put in place to boost confidence and increase inflows of foreign exchange, while urgent steps should be taken to control inflation.

Osinbajo said:’`Our exchange rate regime remains of concern; the discussion that we must have, shorn of sentiments, is how best to manage the situation.

“This is by finding a mechanism for increasing supply and moderating demand which will be transparent and will boost confidence.

“All of these discovery mechanisms which, at least were transparent, evidence for all to see and they worked.

“So, I think that what we should be looking for is not necessarily any perfect rules, but we must certainly prevent the type of arbitrage that we have.”

He added that the way to do that was to increase supply and demand management, saying, “obviously, from everything we have seen is not working.’’

According to him, it is important to focus on increasing supply as it will increase confidence of local businesses and investors.

Osinbajo said that people must be shown that they needed not to have any particular attribute to access foreign exchange.

Osinbajo said that serious efforts ought to be made to address inflation.

The vice-president said : ‘`Going ahead, I think it is also important for us to look at other issues that might concern us and require urgent action.

“Inflation, for example, needs to be tackled headlong, because it is both as economists will say, it is a task on the poor and it disrupts long term growth.

“While they may not have been perfect, the rules were clear and the gap between the official and parallel markets was not so wide.

“The thing is that there should be some element of price discovery in our policy regime; this will boost confidence and increase inflows of foreign exchange.

“We will also have to take urgent action to bring inflation down because it is both a tax on the poor and disrupts long term growth.’’

Osinbajo said that inflation in Nigeria was partly structural arising from infrastructural deficiencies but there was also an aspect that was caused by increased money supply, imported inflation and depreciation of the naira.

According to the vice-president, in addition to the monetary measures being taken by the Central Bank of Nigeria, there is need to increase domestic production of food and make sure that it gets to the market.

Osinbajo said: “In this regard, we must pay closer attention to the institutional insight of the Agriculture for Food and Jobs Programme of the Economic Sustainability Plan.

“It sought to support small scale farmers by guaranteeing uptake of their production through enabling bigger farmers, suppliers to manufacturing companies and commodity exchanges to support them across every stage of production.

“ It is now evident that if there is one global issue that will impact local economies most profoundly it is climate change.

“But it bears repeating that African countries including Nigeria did very little to cause global warming but yet as recent floods all over the country show, we bear the brunt of it.

“We must continue to call for a just transition that enables us to use our abundant gas resources to meet our energy needs including for electricity and cooking.”

Osinbajo said that this would enable the nation to secure the resources needed for investment in natural gas as well as in renewable forms of energy.

He said: “Nigeria should continue to work alongside G77 and China partners on the issue of compensation for ‘Loss and Damage’.

“This is essentially requiring that those who caused the climate change related challenges that we face should pay to help us overcome these challenges.”

Osinbajo added that he was happy that the matter was on the table at the ongoing COP 27.

Share this on WhatsApp
Related Topics:concernNigeria’s exchange rateOsinbajo
Up Next

Presidential candidates who flag off their campaigns in Plateau win elections – Gov. Lalong