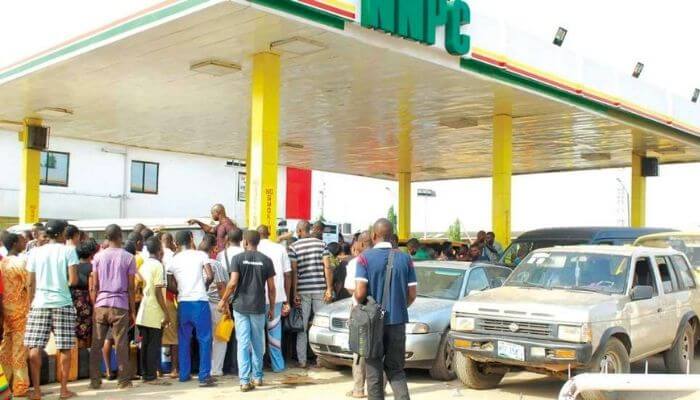 The Nigerian National Petroleum Company (NNPC) Limited and the Independent Petroleum Marketers Association of Nigeria (IPMAN) have differed on the actual cause for the ongoing fuel scarcity in some parts of the country.

In the last few days, many Nigerians have been grappling with petrol scarcity as queues have surfaced in filling stations across the country. Some stations sell petrol above N230 per litre while the black market price is as high as N300.

Amid the scarcity, there have been insinuations that oil marketers may be hoarding the product to force a hike in the price.

In what appears to be their first official reaction to the crisis in the downstream oil industry, the NNPC blamed the fuel scarcity and long queues at the filling stations on some road projects going on in Lagos.

According to NNPC’s Executive Vice President, downstream, Adeyemi Adetunju, the gridlock is easing as the NNPC has programmed vessels and trucks to unconstrained depots, with massive load outs from depots to various states being closely monitored.

READ ALSO: Why ongoing fuel scarcity may persist beyond 2022 – IPMAN

“The recent queues in Lagos are largely due to ongoing road infrastructure projects around Apapa and access road challenges in some parts of Lagos depots. The gridlock is easing out and NNPC has programmed vessels and trucks to unconstrained depots and massive load outs from depots to various states are closely being monitored.

“Abuja is impacted by the challenges recorded in Lagos. NNPC retail and key marketers have intensified dedicated loading into Abuja to restore normalcy as soon as possible.”

He said, “We want to reassure all Nigerians that NNPC has sufficient products, and we significantly increased product loading, including 24-hour operations in selected depots and extended hours at strategic stations to ensure products sufficiency nationwide.’’

Adetunju added that the NNPC has a “national petrol stock of over 2 billion litres. This is equivalent to over 30 days of sufficiency.

But IPMAN blamed the scarcity on the distribution crisis caused by vandalism of depots belonging to the Nigerian National Petroleum Corporation (NNPC).

Speaking in Lagos on Wednesday, Chinedu Okoronkwo, IPMAN president, said since 80 percent of NNPC depots have been vandalised, the product is now being kept in the depots of private individuals, who bear the cost of transporting the product from the ports to their depots.

“It is very important to know where we (IPMAN) belong within the chain. This product – PMS – is the product the government is still paying subsidy for, that is the government brings it in – NNPC,” the IPMAN president said.

“Remember that nearly all the NNPC depots are not working, over 80 percent of them, because of vandalism. We have at least 21 (referring to NNPC depots) that I can count. When they bring this product in, they now begin to put it in private depots and pay them triple charges.

“Those who get from NNPC directly, it is N148.19 per litre. These private tank farm owners, by the time they begin to put their own charges, which involve hiring vessels, NIMASA, NPA, and a lot of things associated, from their depots, you can get it for either N185 or N210.

AEDC disconnects power supply to Niger and its ministries over N1.3bn debt