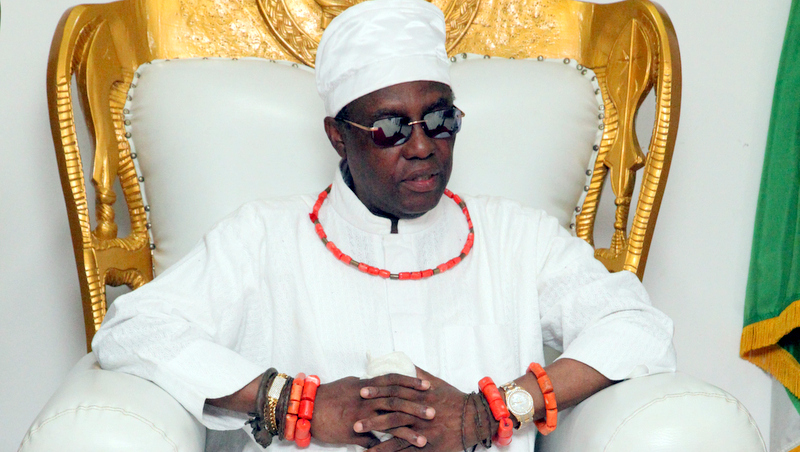 For his subjects and keen observers of his reign, His Royal Majesty, Omo N’Oba N’Edo Uku Akpolokpolo, Ewuare II, Oba of Benin who will clock 66 on October 20 has been a source of inspiration given his remarkable strides since ascending the throne of his forebears three years ago notwithstanding the current harsh socio-economic conditions in the land.

His life touching and outstanding journey so far include a relentless war on land grabbers through the ban on community development associations, CDAs across the Benin speaking seven local government areas, upholding the rich cultural heritage of his people as the chief custodian of culture and tradition, using traditional religious beliefs to discourage such criminalities as killings, armed robbery, cultism, kidnapping and sacrilegious acts.

The monarch has similarly been in the vanguard of campaign against human trafficking, a menace that has brought odium to Edo state in particular and Nigeria in general; giving financial and material support to victims of trafficking especially some of the Libya returnees, sustained advocacy for the return of Benin bronzes that were carted away by the British, among others.

It is obvious that Oba Ewuare 11 has been walking the talk from day one as he left no one in doubt about his agenda for the kingdom as enunciated in his coronation speech on October 20, 2016 in which he denounced the activities of bad elements across the domain including the ubiquitous CDAs whose members had made life very unbearable for property developers and investors through extortion in the state.

A few months after his coronation, he kicked started  the process by formally announcing a ban on the group’s activities in the seven local government areas in his monarchy, namely Oredo, Egor, Ikpoba Okha, Ovia South-West, Ovia North-East, Orhionmwon and Uhunmwode council to the applause of most of his subjects.

And not too long, the ban was reinforced by the state government with an enactment of a legislation known as Edo State Private Properties Protection (PPP) Law which prohibits forceful and illegal occupation of landed properties, violent and fraudulent conduct related to landed properties and the illegal collection of land based community development levies by any group or groups in the entire state.

Certainly the law has engendered tremendous relief to the people who had been at the receiving end of their tormentor –in-chief, the land grabbers even though the harassment of property developers has not been completely eradicated in the kingdom.

Under his reign and as the spiritual head of the Benin kingdom, a total war has been declared on human traffickers, kidnappers, robbers, killers who had hitherto made life miserable for citizens.

For instance memories of residents of Benin City, Edo state capital are still fresh with the spectacle that played out when traditional priests and priestesses of different deities, native doctors, and different ancient traditional worshippers in their regalia paraded some major streets whose mission, one recalls, was to invoke age-long traditional practice of cleansing the land and appeasing the gods following the upsurge in cases of killings resulting from armed kidnapping, cultism, robbery, cultism and other violent crimes to stem the ugly development.

Hundreds of traditional worshippers, native doctors and priests in their full regalia had stormed the ancient Urhokpota ground at the heart of Benin City in red attires with different traditional instruments of war and heaped disastrous curses on those committing sacrilege in the kingdom.

The curses they maintained were also targeted at traditions’ violators, sponsors of cultism, kidnappings, human trafficking and other heinous crimes in. Animals were also slaughtered and sacrificial materials offered to ancestors.

Though these crimes have not been totally eliminated but the measure has substantially reduced the spilling of innocent blood which was on the increase at the time.

Prior to this also, the monarch had assembled top sorcerers and magic priests of the kingdom at his palace grounds, to place curses on herbalists, native doctors who aid human traffickers by administering oaths of secrecy on their victims thereby revoking oaths of secrecy on preys of human trafficking which hitherto made it nearly impossible for the victims to testify against their tormentors in court.

Another exceptional gesture of the monarch is the financial assistance rendered to 78 youths evacuated from Libya for his love for humanity. He not only placed them on a stipend of N20,000 each for three months but also, through the Oba Ewuare Foundation provided the necessary tools for those who had undergone relevant skill acquisition training that needed a lift from poverty.

In other words he believes that ‘’a good objective of leadership is to help those who are doing poorly to do well”. Similarly, he has been assisting the government to sensitize his subjects to pay taxes and rates, educate the populace to perform their civic duties, get support for public office holders for them to deliver good governance.

Though unsuccessful, the Oba intervened in the current frosty relationship between the national chairman of the ruling All Progressives Congress, APC, Adams Oshiomhole and his political ‘godson’ Governor Godwin Obaseki over the latter’s second term bid with a view to resolving the issue amicably.

The monarch had even taken a further step to resolve the raging dispute when he led members of the Edo State Council of Traditional Rulers and Chiefs to pay a courtesy visit on President Muhammadu Buhari at the Presidential Villa, Abuja, in July this year to report the feud to the commander-in-chief and also demand two ministerial slots.

Speaking at the meeting, which was held behind a closed door, the Oba noted: “Mr. President, we as traditional rulers in Edo State, are concerned about the crisis between Oshiomhole, APC national chairman and Governor Obaseki of Edo State, and Edo State House of Assembly. If this crisis is not resolved now with immediate effect, it may jeopardize the progress of the state. On behalf of the good people of Edo State, we kindly appeal to Mr. President to use your good offices to intervene and stop this crisis”.

Oba Ewuare described as peace lover, very intelligent and distinguished diplomat by one of his admirers acted in line with a wise counsel of  late Mrs. Eleanor Roosevelt, diplomat, activist and longest serving First Lady of the United States of America who was married to President Franklin D. Roosevelt that, “It isn’t enough to talk about peace. One must believe in it. And it isn’t enough to believe in it. One must work at it.”

During the second anniversary of his coronation last year the monarch had launched a book titled, “The Red Book: The Benin Monarchy: An Anthology of Benin History,” which is a compendium of the work of various historians, researchers, anthropologists, sociologists, writers and analysts. The Forward was written by Oba Ewuare 11 himself.

It is one bold attempt to put in proper perspective, the history of Benin Kingdom right from the Ogiso Dynasty to present Obaship as well as correct some age-long misconceptions. According to Oba Ewuare II, the Crown Prince is not a duke, but the Edaiken N’Uselu, who derives his authority directly from Oba of Benin while no kingmakers exist in Benin Kingdom, because in Benin tradition, a king is born and not made or chosen by any individual or group of individuals.

He further clarified belief in some quarters that Oba Ewuare II was the 39th Oba of Benin, adding that he is the 40th Oba of Benin. This, he noted has accorded formal recognition to Ekaladerhan, the exiled Prince of Benin kingdom as the first Oba of Benin. All previous books on Benin history didn’t recognise Ekaladerhan as an Oba before now.

It is also worth noting that the Oba’s Palace is being transformed from its ancient form to a modern palace under Oba Ewuare II, the latest being  the construction of an ultra-modern and befitting gate, which reflects royalty and the rich culture and tradition of Benin kingdom. It features Queen Idia N’Iyesigie’s head (The Festac Bronze Head), an eagle, an elephant, and the bronze head of a late Oba of Benin.

He got his A-Level Certificate from South Thames College, London and graduated with an Economics degree from the University of Wales, United Kingdom and holds a Master of Public Administration degree from Rutgers University Graduate School, New Jersey, USA.

Oba, Ewuare 11 is married with children. With two ministers already appointed from Edo state, the Oba is reportedly not resting on his oars to getting the two political gladiators still at war in his kingdom to sheathe their sword in the interest of peace, stability and development across the Heartbeat of the nation.

This writer who is one of the subjects of the highly revered royal father joins millions of others to wish him happy birthday and anniversary celebration. Oba gha to kpere, Ise!