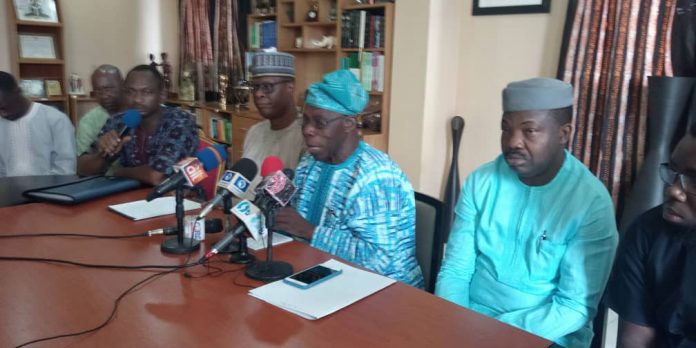 Former President and elder statesman, Dr. Olusegun Obasanjo, has risen to assist and rescue President Muhammadu Buhari from the intractable rising insecurity in Nigeria. National Daily learned that the former President has shifted his actions from writing open letters to the president to direct personal involvement in finding solutions to the perennial pandemonium and bloodbath in the country.

National Daily further learned that Dr. Obasanjo at the weekend held consultative meeting with leaders of Gan Allah Fulani Development Association of Nigeria (GAFDAN) and Yoruba leaders in Southwest Nigeria, including Kogi and Kwara states in the north central to deliberate on the rising insecurity as well as the threats of inter-ethnic hostilities across the country.

National Daily fathered that National Chairman of the GAFDAN, Sale Bayeri, led the delegation of the group to the consultative meeting with Obasanjo which main deliberation was the insecurity in the country.

The Afenifere Publicity Secretary, Yinka Odumakin, was said to have led a delegation comprising of victims and survivors of kidnapping in the southwest.

Former President Obasanjo had acknowledged with dismay that there is an increase in criminality and insecurity in Nigeria, decrying that the magnitude was not as terrible as it is right now.

Dr. Obasanjo had advocated that Nigerians must interrogate themselves about various ugly things happening around them. He stated that Nigeria needs and wants peace, security, harmony wholesomeness, progress, to sustain its corporate existence as united country and promote national development. Obasanjo maintained that to achieve the above, everyone must be involved in the process.