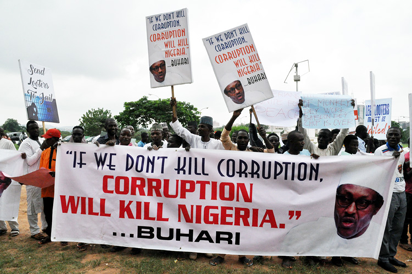 Special Adviser to the President on Political Matters, Babafemi Ojudu, has denied the presidency sponsored a group of Nigerians that embarked on solidarity protests in Abuja in support of the President Muhammdu Buhari-led government.
He told State House correspondents shortly after addressing the pro-President Buhari protesters at the Federal Secretariat/Supreme Court Junction of main entrance of the Presidential Villa in Abuja on Monday.
Ojudu said the presidency was not in the habit of hiring people for protest marches, saying that all those who participated in the pro-Buhari protest were die-hard supporters of the president.
“I was working in my office when I was called to go and receive them, just the way we also received the BringBackOurGirls’ protesters last time.
“This presidency does not give money to anybody. This is not our tradition, it’s not our culture to buy protest or induce people to do any.
“You will be surprised the day President Buhari is coming back to see the millions of people that will go to the airport to welcome him,’’ he said.
Mr. Ojudu denied that the presidency deliberately shunned the coalition of civil society organisations demanding that Mr. Buhari “resumes duty or resigns.
The presidential aide, however, expressed the readiness of the presidency to talk to the coalition if they indicated interest to do so.
“If they decide to talk to us we talk to them. This group has a special message for the acting president and they wrote to us that they were coming and we received them.
ALSO SEE: Edo Speaker impeached
“Those ones never informed us of anything. They were just doing their own protests and that was it,” he said.
Mr. Ojudu charged the pro-Buhari protesters to join hands with other well meaning Nigerians to stand up against those elements who are bent on frustrating the ongoing developmental efforts of the federal government.
“President Buhari stands for anti-corruption. Buhari is not selfish; he is not fighting for himself and the elements who are selfish; who are greedy and corrupt they are standing up and are coming together against him.
“You have to mobilise and educate people across Nigeria to stand up against these people,” he said.
Mr. Ojudu, however, challenged members of the pro-Buhari group on the need to conduct themselves peacefully and shun any act capable of causing social unrest.
The  protesters, who were in their hundreds, presented a letter of solidarity to the acting president through Ojudu.