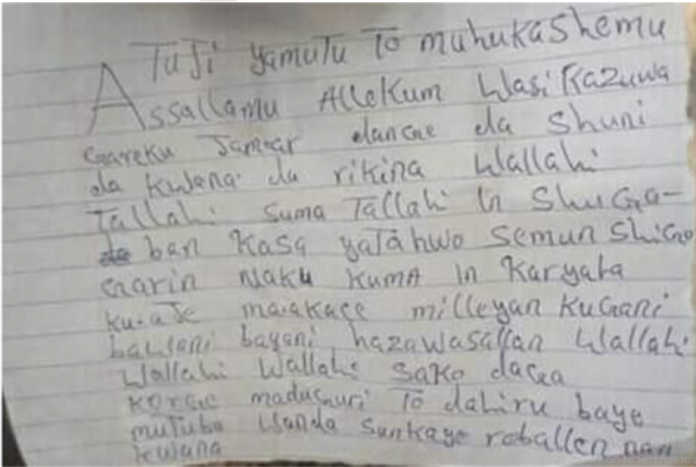 As Zamfara heats up, and bandits flee to neighbouring states, Sokoto appears the next crucible where the criminals are going to wreak maximum damage.

A letter written in Hausa to Sokoto villagers confirms this.

Dange/Shumi LGA is now in disarray after reading the letter, prefaced with peace greetings, followed by threats of destruction and death.

It began last week as the National Daily reported a gang of bandits that called out the villagers to pray at about 2am, only to shoot at them, and kidnapped as many.

Their next target are five villages in  Dange/Shuni Local Government Area.

In the letter the bandits dropped under a tree at Kwanar Kimba Village of Shuni District, Dange/Shuni LGA, the bandits stated they would attack anytime.

“The notice is written in Hausa language by suspected bandits threatening to destroy the villages of Shuni, Kwanar Kimba, Rikina and Dange, and it has thrown residents into panic,” the source stated.

“A million army personnel will not stop us from carrying out the attack, which may be carried out any moment from now.”

Actually, there is no police briefing and countermeasure in place yet.

Sokoto is not among the northwestern states that are going through the wringer in recent time.

With the displacement of the Zamfara bandits, the PDP state is now joining Kaduna, Katsina, and north central states like Benue, Plateau, Niger, and Nasarawa.