Mohammed Abdulrasaq was among thirty other suspected criminals paraded at the state police command headquarters in Lokoja, who masterminded the killing of the policemen. Others include Amarachi Okafor Eze – a female – who robbed innocent commuters in “one chance” between Abuja-Lokoja, Okenen- Lagos highways with her gang.

The State Commissioner of Police, Bensan Gwana who paraded the suspects gave the names of the slain policemen as DSP James Moses, Corporal Isiojola Gbenga and Police Constable Yohanna Amos.

He explained that two of the slain officers, DSP James Moses and Cpl Isiojola Gbenga were ambushed and killed by Mohammed Abdulrasaq while on duty the 10th December 2015 while PC Yohanna Amos was killed on the 13th December.

The CP further explained that late DSP James Moses who was on transit along Akure-Abuja road was shot dead while stopping over at a mechanic workshop to repair his faulty EOD vehicle and his service pistol carted away.

Benson Gwana said following a tip off, men of the Special Anti-Robbery squad engaged in manhunt for the hoodlums who engaged them in a gun duel that led to the recovery of the deceased service pistol and one AK47 riffle.

“Two of the robbers sustained bullet wounds and later died on their way to the hospital while the others escaped,” the commissioner added.

Luck, however, ran out of Mohammed Abdulrasaq when the police received further information that the fleeing suspects had set out for another robbery operation in an ash colour Nissan Almeria car.

Operatives from the special Anti-robbery squad (SARS) and a team from from Okehi Divisional police Headquarters were said to have embarked on a serious patrol along Ozikutu Obagede road where he was arrested.

Three other suspects were said to have abandoned their vehicles and jumped into the bush.

Items recovered from the criminals in the abandoned vehicle include one AK47 riffle with 3 rounds of live ammunition.

Other items are one pump action rifle and 4 live cartridges, five masks and one Nissan Almeria car which they have been using for their operation.

Meanwhile, the 20-year old Amarachi Okafor from Anambra State confirmed that she has been carrying out “one chance” robbery business since December 2015, adding that they have made over N20, 000 from several operations.

According to her, the gang used second hand Odyssey With registration No. SMK 487 CZ, to robber on the high way.

From L-R Muhammed Abdulrasaq (masked) who killed 3 police office with his gang.jpg 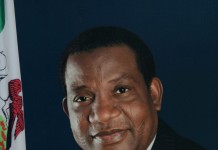