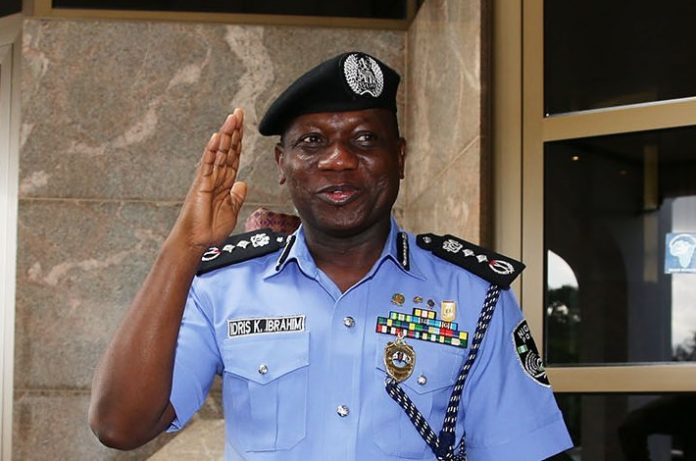 There are rising discontents in the Nigeria Police over President Muhammadu Buhari’s extension of the tenure of the Inspector General of Police, Ibrahim Idris, whose is due to proceed on three months retirement leave towards the end of October 2019 into his retirement in January 2019.

National Daily exclusively gathered from Police sources that President Buhari has approved six months extension of the years of the Inspector General, now, prolonging the stay of IG Idris to June 2019 from the January retirement date, thus, retaining the IG for the 2019 general elections which begin in February 2019. The president was said to have more confidence in IGP Idris for the 2019 elections than taking the risk of a new police boss in the elections.
The lingering discontentment over the tenure elongation of Idris add to the accumulated controversies trailing the tenure of the IG which include the discriminatory promotion of Police Officers which the IG referred to as Special Promotion of ‘dedicated police officers’. The controversy over the Special Promotions has pitched the IG against the Chairman of the Police Service Commission who on assumption of office commenced review of controversial promotions in the Force with intention to demote officers promoted before their qualified dates of upliftment in the service.
Accordingly, the Inspector General of Police (IGP), Ibrahim Idris, had opposed the plan by the Police Service Commission (PSC) which former IG of Police, Musiliu Smith, is the Chairman, to demote some Police Officers who were given Special promotion by the former board of the Commission in the recommendation of the IGP. The IG insisted on validating the promotion of the officers since his appointment in 2016.
The IG, in a protest letter to the Chairman of the PSC threatened discordant relationship between his office and the Police Service Commission, as well as the Nigeria Police and the Commission.
In a letter: ‘’Re: Planned Demotion of Police Officers Promoted Between 2016 and 2018 by the Newly Constituted Board of the Police Service Commission’’, dated September 23, 2018, to the Chairman of the Police Service Commission, the IGP cautioned that even though the PSC Chairman has the right to discipline or demote officers of the Force, he has to tread the path of constitutionality, legality, duties and powers conferred on his offices and that of the IGP by the extant laws.
IG Idris warned former IG Smith that the functions, roles, inherent powers and duties of the offices of PSC Chairman and the IGP are unambiguous as contained in the 1999 Constitution (as amended), Police Act, Police Regulations and Police Service Commission Act.
IGP Idris had declared: “I appeal to the highly experienced Chairman of the Commission and a well-respected former IGP, not to allow the Police head for collision.
‘’On my appointment as the IGP on the 22nd of June 2016, I assured President Muhammadu Buhari of my determination to confront crime and criminality in the country in line with the mantra of His Excellency. I have largely succeeded on this promise as there is hardly any major crime without a breakthrough.
‘’This was made possible with the support of highly dedicated, professional, efficient and committed officers who worked day and night to ensure their arrest and prosecution while others are lazing about in search of posting. The only way to encourage and motivate these officers for greater efficiency is to recommend them for special promotion in line with the general principles of promotion.”
The IG maintained that, “These recommendations were duly approved by the Commission and letters of promotion issued to them and the officers posted accordingly and are performing efficiently.”
He argued that, “For the same Commission to demote them outside their power of discipline to say the least will be arbitrary, selective and discriminatory;” threatening: “I am, however, quite certain that the Chairman will not tow this line of action despite petitions from disgruntled officers. If it does, the Police Service Commission, the Nigeria Police and the affected officers will not only be locked in very serious litigations but in controversies and scandals that will not do the Police any good.”
Some of the beneficiaries of the controversial promotion have filed a suit at the Federal High Court, Abuja, seeking an injunction to restrain the Police Service Commission from the planned demotion exercise. In suit No. FHC/ABJ/CS/1077/2018, Igbodo David, Abba Kyari, Abdulraman Mohammed Abraham Godwin, Ahmed Monday and Akadu Godwin, were identified as the Plaintiffs, suing for themselves and on behalf of all Police Officers promoted by the Police Service Commission on the Special Recommendation of the Inspector General of Police between 2016 and 2018; while the Police Service Commission was identified as the defendant. The suit was dated October 3, 2018 and was filed on October 4, 2018 praying the Court the following orders: an order granting leave to the Plaintiffs to sue for themselves and on behalf of all Police Officers promoted by the Commission on the Special Recommendations of the Inspector General of Police between 2016 and 2018; an order of interim injunction restricting the defendant, their agent, servant and privies from demoting the Plaintiffs and other Police Officers duly promoted by the Inspector General of Police between 2016 and 2018 pending the determination of the motion on Notice filed before the Honourable Court; and for such further or other Orders as the Court may deem fit to make up in the circumstances.
The case was adjourned to October 16, 2018 for hearing of the Motion on Notice.
IGP Idris had complained that he first heard of the planned demotion in the media that Smith constituted a committee headed by the former Justice of the Supreme Court, Justice Clara Bata Ogunbiyi, to review and demote Police officers promoted between 2016 and 2018 by the last PSC Board.
The IG protested that Smith’s Personal Assistant, CP Olayinka Balogun (rtd), on September 19, 2018, in the Osun State Commissioner of Police, Osogbo, vowed that the Commission had concluded plans to demote some Police officers. He insisted that his office was not contacted before the Commission commenced the demotion process as stipulated by laws and protocol.
Meanwhile, the demotion matter is already before a federal high court for consideration.

Subsequently, the IG was involved in another controversy in which he was reported to also oppose the promotion of some Police Officers to Assistant t Inspector Generals of Police (AIGs) and Deputy Inspector Generals of Police (AIGs). However, the IG denied the report linking him to rejection of the newly AIGs and DIGs by the PSC, claiming that they have been posted to various locations and units in the Force across the country. However, statement of the approval of the posting of the newly promoted AIGs and DIGs was released after the IG had denied reports of his opposition to the promotion.